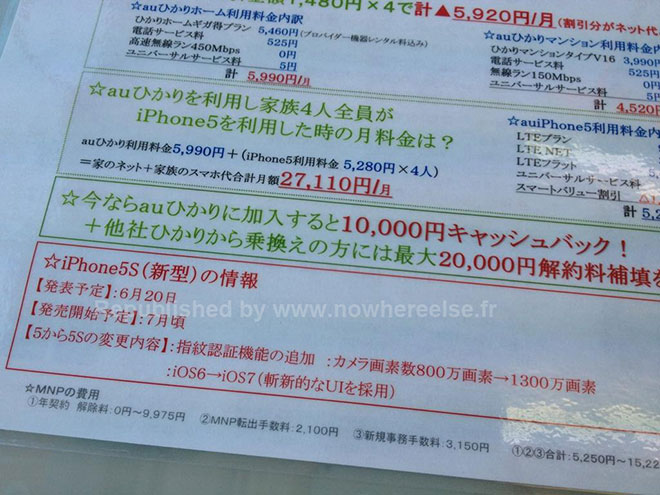 Tim Cook caused quite a bit of commotion last week when he told investors that Apple “has some amazing new hardware, software, and services coming this fall.” Most folks took it as we aren’t going to see anything new from the company until then.

But that may not be the case, according to a purported leaked document from Japanese wireless carrier KDDI. The internal note, meant for sales floor staff, offers up plan pricing information and some details about the upcoming iPhone 5S smartphone…

The leaked flyer comes from French website Nowhereelse.fr, who has posted accurate leaks in the past. And the most interesting stuff is written in red, which is starred and annotated as information regarding a “new product,” Apple’s next-gen iPhone.

According to the document, the iPhone 5S will be announced in June, with pre-orders for the handset starting June 20. It doesn’t give an official launch date for when the device will go on sale though, it just says that it will be available the following month.

Below the release dates is a section describing major feature differences in the iPhone 5 and 5S, saying the latter will include a built-in fingerprint reader, an upgraded 13MP iSight camera, and iOS 7—all of which have been mentioned in previous reports.

And not only does the handset’s description lineup with what we’ve been hearing so far, but the pre-order date comes one week after the World Wide Developers Conference. It’s not hard to imagine Apple announcing the iPhone 5S during its big keynote.

But that being said, the dates don’t jibe with recent talk that the 5S has been delayed due to manufacturing issues. And to be honest, it’s sketchy that a carrier would have classified intel floating around on a laminated document. So add your grain of salt here.

Should it wait until the fall to announce its new handset though, Apple’s going to have a busy couple of months. On the menu for pre-holiday launches are two new iPad models, the budget iPhone, refreshed iPods and Macs, and the rumored “iWatch” smartwatch.