If there is someone in the hacking community that is filling up his resume with some of the top tech companies, that would be Nicholas Allegra, aka Comex. Although he hasn’t been really active in the iOS community since he released JailbreakMe 3.0, the young hacker hasn’t been resting on his laurels either.

After carrying out an internship for Apple in 2011 (which was terminated in October 2012), Comex has now announced on Twitter that he is going to intern at Google…

The tweet reads: “In other news, I’m going to intern for Google in a few weeks.”

Of course, people were already speculating that he’d probably be working on Android, but Comex quickly denied the claim, while still keeping the focus of his future work at Google unclear. 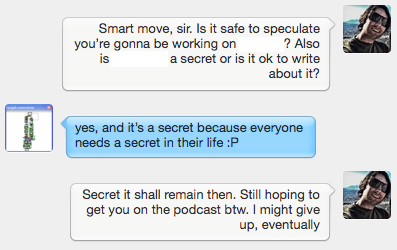 This isn’t unclear to everyone though. If you’ve been in the community long enough, you probably know what Comex is up to. I asked him if it was ok to share what he will be working on with iDB readers, but as you can see on the screenshot above, Comex didn’t want to publicize this for the time being.

Still, this isn’t top secret information, and I’m sure Comex will talk about it publicly in the near future. Or maybe he’ll tell us all live on an episode of Let’s Talk Jailbreak? That’s if we’re lucky, of course.

In the meantime, the iDB team wishes Comex the best for his new ventures.