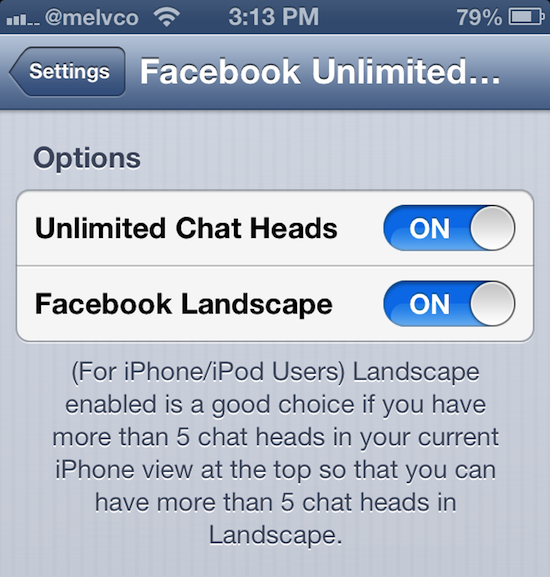 Yesterday we showed you a couple of free, handy jailbreak tweaks that allow you to activate the new Chat Heads and sticker features in Facebook’s 6.0 app. And that’s great for the folks that didn’t have access to them, but what about everyone else?

Don’t worry, we have you covered too. For those of you who already have Chat Heads enabled in the Facebook app, there’s a new jailbreak tweak out called FB Unlimited Chat Heads that removes Facebook’s pesky 4-Chat Heads-or-less limitation…

The tweak comes from developer PoomSmart, who is also behind the FB Chat Heads Enabler package we covered yesterday. And while it’s just as simple and straight-forward as Enabler, it does feature a couple of toggles in the Settings application.

The first one is the On/Off toggle for the tweak, which allows you to disable it without having to completely uninstall it (I love it when developers include this option). And the second is for enabling and disabling Landscape mode for the Facebook app.

Here’s a note from the developer on landscape mode:

“However the chat heads won’t enter a new row if they reach the maximum display width on screen so the true limit of your chat heads count now is your screen width.

For iPhone/iPod users I’m including a “Facebook Landscape” option in Settings to make your Facebook landscape and then you have more Chat heads count because your screen width has increased.”

I have to say, I really like the Chat Heads feature, as well as the stickers, but I’m rarely (if ever) messaging with more than 4 people on Facebook. I did it this afternoon, though, while testing out this tweak, and I can confirm that it works as advertised.

I guess if you message a lot of folks on Facebook, FB Unlimited Chat Heads in worth checking out. You can find it in Cydia, in the BigBoss repo, for free. It works with all iOS devices running iOS 5 or higher, and version 6.0 or higher of the Facebook app.