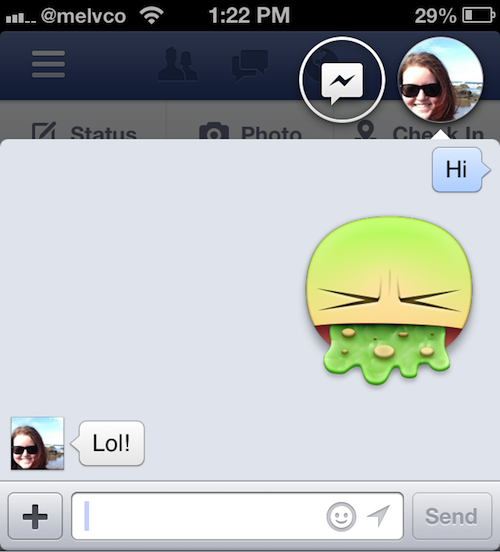 Last week, Facebook released version 6.0 of its app for the iPhone and iPad. The update included two highly anticipated new features, Chat Heads and stickers, which the social network showed off at its ‘Home’ media event earlier this month.

Unfortunately, the two features are on a staggered rollout that Facebook said should be done “over the next few weeks,” so not everyone has them yet. But never fear. As usual, the jailbreak community has come up with an easy way around this…

There are two jailbreak tweaks available in Cydia that will actually enable Chat Heads and stickers for you: FB Chat Heads Enabler and Facebook Sticker Enabler. Both are free and easy to install. All you need is a jailbroken device and Facebook 6.0+.

I feel like the stickers feature is the least significant of the two, so we’ll talk about that one first. Facebook Sticker Enabler is a simple tweak that—you guessed it—enables stickers. It says it’s for iPad, but I was able to get it to work on my iPhone.

FB Chat Heads Enabler is similarly simple. Once installed it takes effect, so there’s no icons to worry about or options to configure. This one will enable the Chat Heads feature in your Facebook app (note that this is not the same as Adam Bell’s hack).

To see the fruit of your labor, just open up the Facebook app and send a message to someone. You should notice a Chat Head appear at the top of the app, as well as an option to embed stickers. Again, keep in mind that these only work in the Facebook app.

Obviously, if you already have access to these features, you can skip these two tweaks. But if, like me, the rollout hasn’t hit you yet, you can find both FB Chat Heads Enabler and Facebook Sticker Enabler in Cydia, in the BigBoss repo, for free.

Have you tried either tweak yet? What’d you think?