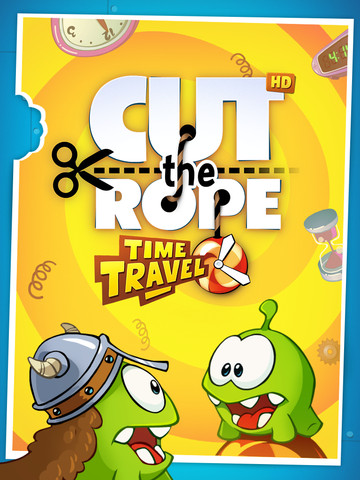 Om Nom, a charming little green monster, is back to collect some more stars in a Cut the Rope sequel, titled Cut the Rope: Time Travel. UK-based developer ZeptoLab, which last week teased the game, didn’t embark much from the originally physics-based concept but it did bring something new to the table: time travel.

Cut the Rope: Time Travel has you playing in six different settings, including the Middle Ages, the Renaissance, a Pirate Ship, Ancient Egypt, Ancient Greece and the Stone Age. Read on for more details…

Om Nom’s ancestors are waiting – and they’re getting really hungry for candy. Join Om Nom as he travels back in time to feed his ancestors with candy.

And here’s the Middle Ages episode.

Another teaser worth watching…

Cut the Rope: Time Travel for the iPhone and iPod touch is 99 cents a pop. There is also a high-definition build for iPads, which is an additional three bucks.

Cut the Rope: Time Travel is a nice twist on an already fantastic game, yet still familiar to play. That said, if you like Cut the Rope, this one should be a no-brainer.

Did you ever play Cut the Rope games?

If so, do you prefer Cut the Rope over Angry Birds?