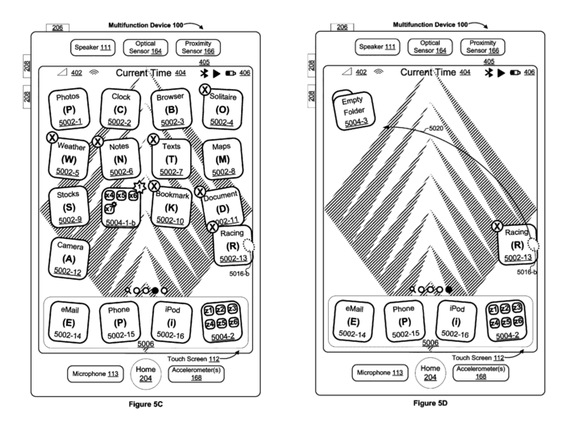 Apple Tuesday was granted a patent for how it manages folders on the company’s iOS devices, including the familiar “jiggle” user interface. The patent, awarded by the U.S. Patent and Trademark Office, describes a “device, method, and graphical user interface for managing folders.” In the 2010 application, Apple said the interface relieves the “significant cognitive burden” and wasted energy traditionally required for moving files and icons on a computer desktop…

For example, using a sequence of inputs to create, modify and/or delete folders and content within folders is tedious and creates a significant cognitive burden on a user.

The iPhone maker then revealed some interesting insight into its ‘jiggle’ interface for iOS, an action indicating the desktop is ready for manipulating.

“The selectable user interface objects jiggle as though they are floating on water,” Apple remarks in one description of the process.

The company’s U.S. Patent No. 8,423,911 filing outlines a multifunction device which displays a plurality of selectable user interface objects on the display.

At another point, Apple outlines a “folder creation region” on a device’s screen that a user could touch, launching an animation of an empty folder.

That step was actually never included in iOS 4, the first version of the Apple software for its mobile devices. Instead, in current implementation users create an iOS folder simply by sliding one folder icon atop another.