And just as T-Mobile yesterday announced “gangbusters” iPhone opening (even if that’s not really a number), Verizon swiftly responded by delaying phone upgrades from 20 to 24 months. The backlash ensued and Verizon quickly realized the change may not be “consistent with how the majority of customers purchase new phones today,” as it argued.

Therefore, the big red carrier followed up by announcing a one-year monthly installment plan for high-end smartphones costing over $349.99. It’s called Device Payment Plan and we have all the details right after the break…

In a nutshell, Verizon’s brand new option for customers spreads the full, unsubsidized smartphone price over the course of a year through monthly installments, per internal communication originally leaked yesterday by Droid-Life. 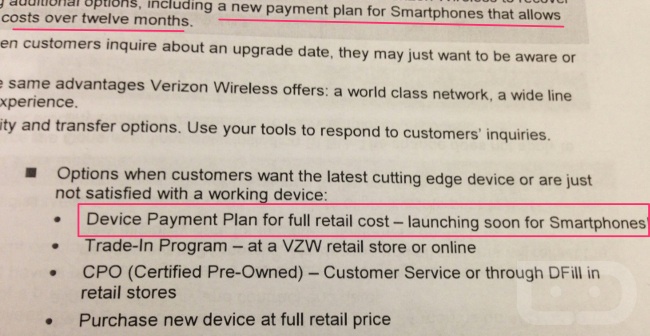 It’s basically an additional option for people who “want the latest cutting edge device or are just not satisfied with a working device,” according to the leaked document.

People who are cool with dividing the full cost of their device over twelve monthly installments will also need to pay a “finance charge” of $2 per month, amounting to $24 annually.

A company spokesperson confirmed to The Verge that only smartphones and tablets costing north of $349.99 are eligible for a Device Payment Plan.

Engadget points us to an updated version of Verizon’s upgraded eligibility terms from yesterday, now with an added paragraph stating that Device Payment Plan launches April 21.

Customers also have the option of purchasing a phone at full price at any point before their contract expires and beginning April 21, some devices will be available for purchase through the Verizon Wireless Device Payment Plan.

The new Device Payment Plan is separate of and has nothing to do with existing device subsidies, which continue to be accounted for in Verizon’s wireless service costs.

Earlier this month, Verizon CEO Lowell McAdam said he would “watch the consumer response that T-Mobile gets” from its decision to drop contracts and phone subsidies altogether.

The carrier did not talk specifics, but we’re inclined to think that paying full retail price upfront may still be a little more affordable versus opting for a Device Payment Plan, at least in the long run.

The new Device Payment Plan should help offset yesterday’s downgrade to the previous 20-month early upgrades, now extended to 24 months. This means that Verizon won’t count you eligible for a fully subsidized high-end device upgrade until you complete 24 months on your billing contract, which is a bummer.

No matter how you look at it, no one can touch T-Mobile’s ‘Uncarrier’ terms.