Apple appears to want its apps to lose the ‘outsider’ label. In an email communication to its registered developers sent earlier this week, the App Store owner encouraged programmers to localize their applications because it’s “never been more important.” Also, in the latest round of moves aimed at Chinese consumers, the iPhone maker updated its online support forums to handle the native language…

According to AppleInsider, the request by Apple was made via iTunes Connect. Members of the service were told they could begin localizing their apps for Simplified Chinese and Traditional Chinese, along with several other languages.

Both the App Store and the Mac App Store are in 155 countries with 40 languages.

However, some developers we talked to expressed concern over Apple’s push for software localization, mostly citing cost concerns. 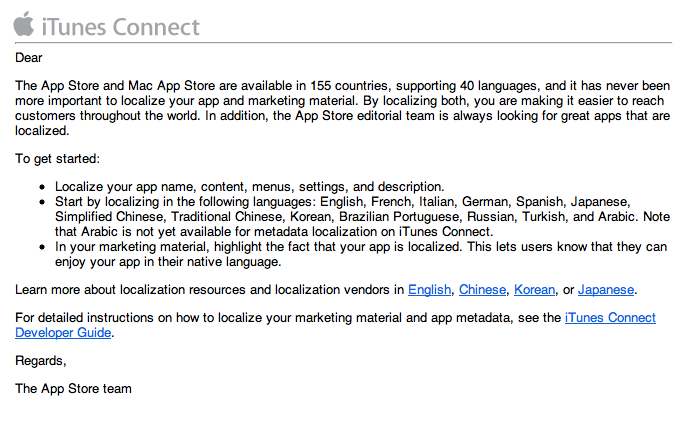 Just before the call for app localization, Apple unveiled a version of the Chinese Support Communities forum, an effort to permit local users to submit questions and provide answers written in their local language.

Both actions are viewed as an attempt by Apple to broaden its international push as well as increase its bond with China.

“The two developments suggest Apple is making a move to bolster its international presence,” writes the publication.

Talk persists that Apple will land China Mobile – the world’s largest carrier – as a partner.

Although there have been discussions by both sides – including a trip by Apple CEO Tim Cook earlier this year – most recently, the company has been busy putting out fires there.

Then, days after CEO Tim Cook apologized to Chinese consumers after a state-led protest over warranty practices, the iBooks owner pulled a number of eBooks critical of the Chinese government.

All of this has prompted Apple to dispatch its VP of Operations Jeff Williams, who visited China to deal with the ongoing PR crisis, with M.I.C. Gadget reporting that Williams is in Beijing, talking with government officials and checking up on Apple’s operations in the country.