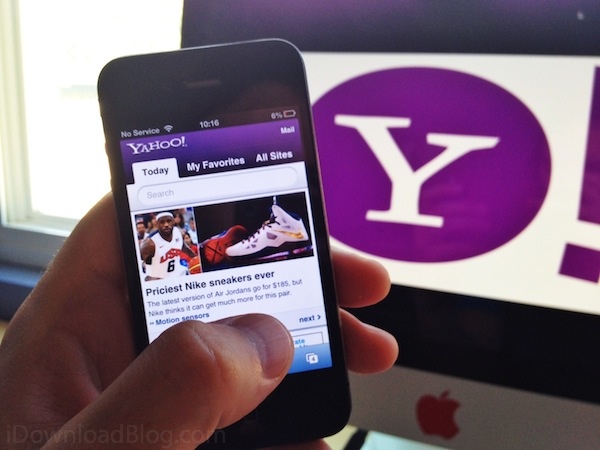 It looks like Yahoo could stand to gain from the war that has broken out between Apple and Google. Now that the iPad-maker has cleared nearly every trace of Google from the stock iOS experience (besides web search), it’s apparently in the market for a new partner.

And that partner could just be the Sunnyvale, California-based Yahoo. The web company already provides data for a few iOS apps, including Weather, Stocks and Siri. And according to a new report, it’s in talks with Apple to take that relationship to the next level…

“Data from Yahoo Finance and its weather site already come preloaded onto iPhones and Yahoo data like sports stats help power Apple’s voice-activated “assistant” Siri. But the companies continue to discuss new arrangements, including possible deals to get more content from Yahoo Sports and Yahoo News, among other Yahoo Web properties, preloaded onto Apple devices or available through an expanded partnership with Siri, one of these people said.”

The talks, which are said to be in very early stages, stem from both Apple’s want to push itself further away from Google, and Yahoo’s need to grow its presence on mobile devices. And given Yahoo’s content deals, and Apple’s large mobile install base, it’s the perfect match.

Another matter being discussed, The Journal says, is web search. Yahoo would like to provide search results for Apple in Safari, but the company has a long-standing deal with Google already in place. And besides, Apple knows that Google is still the best in that space.

But what about a workaround? Think about this: Ask Siri if there are any good movies coming out, or what the weather is like outside. Does she have to search the web for that? No. Now imagine, with more Yahoo data, how many questions she could answer without Google.

What do you make of all of this? Would a deeper Yahoo partnership be a good move for Apple?