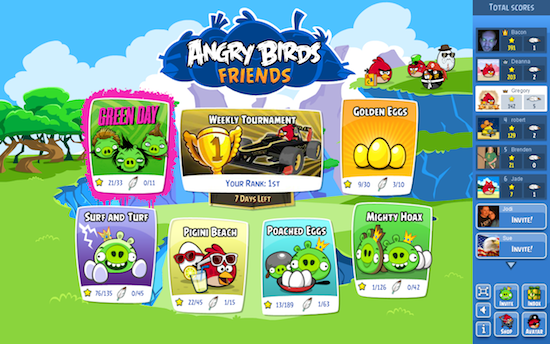 With more than 6 different games from the Angry Birds franchise bouncing around in the App Store, we probably didn’t need another one. But we’re getting one. Rovio announced today that its bringing its Facebook hit ‘Angry Birds Friends’ to iOS.

“Pop some piggies with your friends wherever you are! Angry Birds Friends spruces up the classic Angry Birds experience with fun new social features that integrate with Facebook. For the first time ever the fans of Angry Birds can use their mobile to challenge their Facebook friends in weekly tournaments for the coveted bronze, silver and gold crown on the levels. Gather daily rewards, send and receive gifts of power-ups with your friends and brag about your accomplishments.”

Angry Birds Friends first launched on Facebook’s app platform back in May of 2012 and now sees over 60 million monthly installs and over 1.2 million daily users. All together, the Angry Birds titles have seen nearly 2 billion downloads across platforms.

As noted by MacRumors, Rovio also reported its 2012 financial results this morning, revealing sales of $195 million with a net profit of $71 million. 45% of Rovio’s revenue now comes from merchandising and the four major games that it released in 2012.

It didn’t give an exact date for the Angry Birds Friends iOS launch, but the word is we should see it sometime next month.