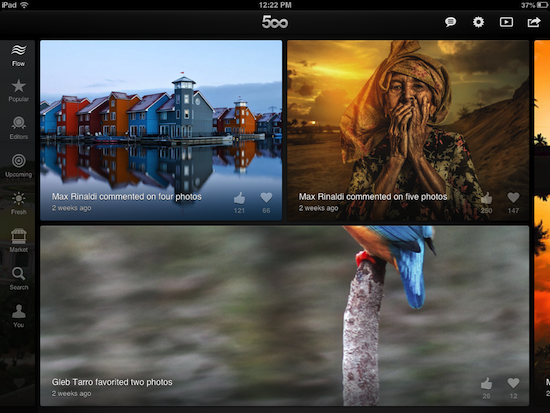 Premium photo sharing site 500px made a big splash last fall when it finally launched a native app for the iPhone. And despite getting pulled from the App Store for a week in January, it’s managed to garner more than a million downloads.

Today 500px has updated its iOS offering, bringing the app to version 2.1. The update includes a new Following and Followers list, so you can keep track of your network, performance improvements and adds the Flow feature to the iPad…

-Flow for iPad – A stream of amazing photos that your friend’s like and favourite!
-Following & Followers – See a list of all the people that you follow and who follow you!
-Stability & Speed – We’ve spent a lot of time focussing on stability and speed. Expect a faster experience on all device

Perhaps the biggest addition in the update is Flow for iPad. For those who aren’t familiar with it, Flow is a personalized display that shows you images that your friends have uploaded, liked or commented on. And it looks great on the tablet.

The other improvements are nice too. I like the new Following & Followers list, so you can keep track of your 500px social circle. And although it may just be a placebo effect, I feel like the app seems snappier than it did before today’s update hit.

I think 500px is one of the better looking photo sharing sites out there, and it carries through to their iPhone and iPad apps. If you’re at all interested in photography, or just want to check it out, you can find the 500px app in the App Store for free.