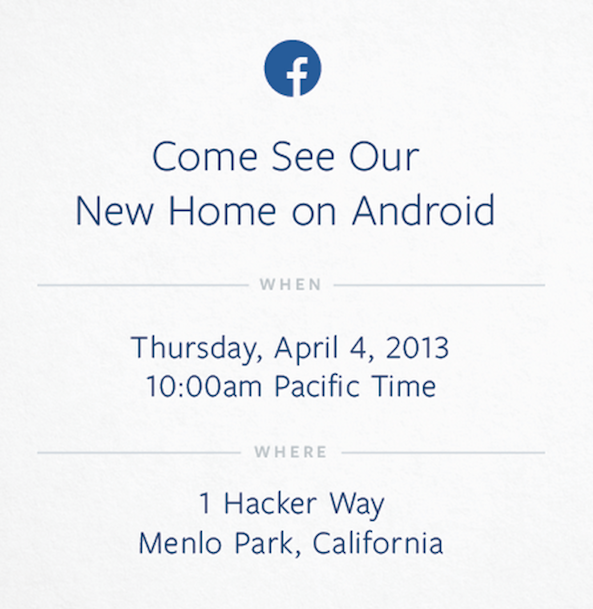 Just a little bit ago, Facebook sent out press invitations for a media event next week. The keynote will take place at 10:00am PST on Thursday, April 4, at the company’s headquarters on 1 Hacker Way in Menlo Park. What is it going to be talking about? Maybe its new smartphone.

Yes, I know. We’ve heard this rumor enough now that it’s almost meaningless. But it sounds like it’s for real this time. A new report says the handset, which is being built by HTC, has a 4.3-inch display, an iPhone-like Home button and is running a forked version of Android…

The invite, seen above, says “come see our new home on Android.” Obviously this could mean a lot of things, like a revamped Android app. But TechCrunch is confident that Facebook will be showing off a new Android-based OS running on an HTC phone. And 9to5Google agrees.

“One source recently told us to be on the look out for a Facebook mobile press event in early April where the social network would reveal an altered Android OS running on HTC. It’s said not to be a full-on rewrite of Android, but rather a “flavor” that will have all sorts of extra Facebook functionality built in.”

“Follow years of rumors and speculation, Facebook is finally readying an entry into the mobile phone market. The social network is again hooking up with HTC which will design the hardware. The two companies have been working on a major marketing campaign in Southern California in recent weeks.”

Gurman cites ‘people familiar with the development of the handset’s marketing campaign,’ saying that the ads are designed to focus on the users and potential users of the phone—not on software or hardware specs. He even shares one of the tag lines: “more than just an app.”

As for the phone itself, it’s said to be reminiscent of the iPhone, with rounded corners and a large Home button at the bottom. It’ll have other ‘function’ buttons though, and a larger display. And the processor, camera and rest of the hardware are all expected to at least be competitive.

It’s not known for sure whether or not Facebook will unveil the new handset at next week’s event, but it’s believed to be very close to launching it. The question is, between Samsung’s new Galaxy S4 and Apple’s inevitable launch of the iPhone 5S, will it generate much interest?