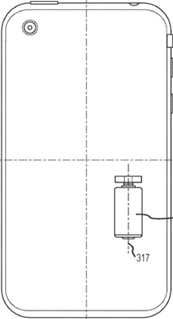 Think of how a cat, when dropped, can twist its body to land on its paws. Now think of your iPhone falling. Makes you cringe, just thinking of the finely-crafted case and display biting the sidewalk or floor. Enter Apple, taking a lesson from felines and wrapping it in some futuristic technology for a patent designed to protect your iDevice from falls.

In a patent application entitled “Protective Mechanism for an Electronic Device,” the iPhone and iPad maker outlines a series of inventions spanning technology now available to some concepts more Jetson-like…

Apple’s patent filing involves sensors to detect when a device (the iPhone is specifically mentioned) is falling, its speed, and orientation to the ground.

Those sensors connect to processors, which determine how long to impact and the best crash position to limit damage – corner versus a belly flop on the screen, for instance.

An electronic device including a processor, a sensor in communication with the processor and a protective mechanism.

The protective mechanism is in communication with the processor and is configured to selectively alter a center of mass of the electronic device.

Additionally, the electronic device also includes an enclosure configured to at least partially enclose the processor and the sensor.

That’s all relatively in reach.

But the patent goes on to describe technology to prevent a device falling or changing its position in mid-air that you’re more likely to find in a spy novel than a mobile phone.

In one scenario, a weight inside the device is shifted along the length-width axis to change the phone’s center of gravity based on previous fall data stored in memory. The remaining options seem to be so impractical as to be lifted straight from a James Bond thriller, but they illustrate the creativity put into protecting your phone.

One option suggests a method to “grip the plug” of an accessory, such as your headphones, to stop a device crashing to the ground. This sounds like the mirror opposite of Apple’s MagSafe connectors which break away from your laptop to prevent a computer being dragged off a table.

Other possibilities: Your device could sprout wings, acting as air foils to slow or alter the fall. Finally, your iPhone could be equipped with a canister of gas that acts as a “thruster” (I’m not kidding, that’s what Apple’s filing mentions).

All of which begs the question: Why not just include a protective case?