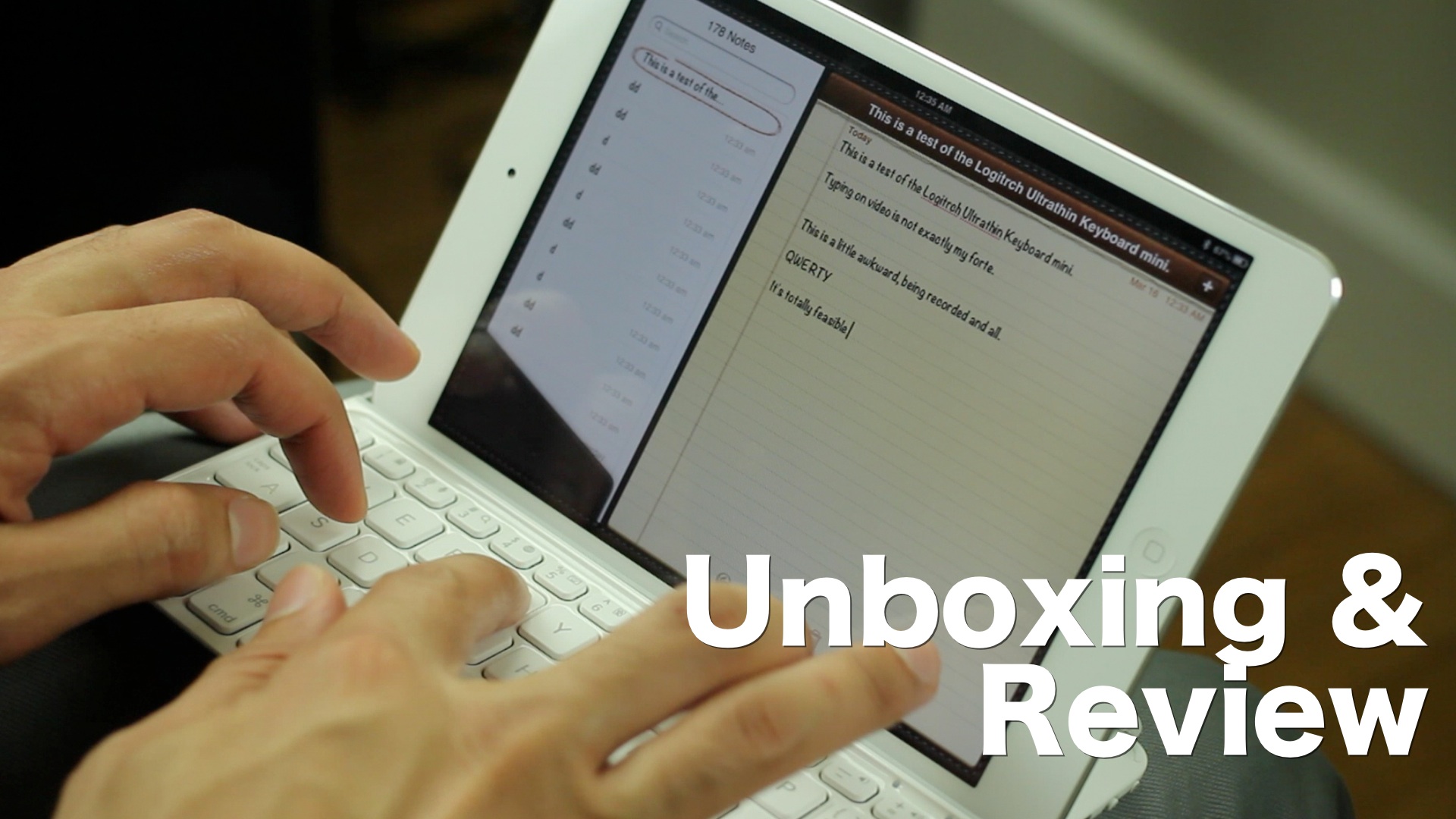 My goal was to type more efficiently on my iPad mini, without sacrificing the device’s portability. I also wanted a keyboard that would actually improve my typing ability, not hinder it. I found such a product with the Logitech Ultrathin Keyboard Cover for iPad mini.

I know — that’s a whole lot of name for such a diminutive product. Let’s just call it the Ultrathin mini hereafter, shall we? Good. Let’s talk about what makes this little device so special, and how it has significantly improved my iPad mini based workflow.

As a blogger, I obviously do a lot of writing. I probably don’t do as much writing as the average full time blogger — I’m too busy editing video to do that — but I do enough. One of the things that I love about blogging is the freedom that it permits. I can literally work anywhere, at virtually any time of day. It’s the perfect job if you have a crazy schedule like I seem to always keep.

With this in mind, a laptop is obviously desirable. I have a laptop, a 15″ MacBook Pro with Retina display, with maxed out specifications that’s perfect for video. But I’ve found that such a laptop isn’t exactly ideal for working on the go. Due to battery life, weight, and bulkiness, it’s pretty obnoxious to use at a coffee shop, let alone in a crowded airport while I await my next scheduled departure.

The MacBook certainly has its place, but I needed something else. I needed something that would provide me with greater freedom. Obviously, that something, is my iPad mini. No, it’s not an original idea, but it’s an idea that I was determined to perfect, if possible.

That’s a long winded way of saying that I decided to try the Ultrathin mini to meet this need. I’ve used external Bluetooth keyboards before with an iPad, but I’ve never used a product like this.

The Ultrathin mini, as its fully name alludes to, is a cover that wraps around the front of the iPad mini. It’s not a case, as it doesn’t fully encapsulate the tablet; it works more like a thicker version of Apple’s Smart Cover, one that just happens to have a full QWERTY keyboard on the inside.

When you close the cover, it basically looks like two iPad minis are stacked on top of each other, screens facing. The Ultrathin cover appears to be just slightly thinner than the product it serves to protect, which makes for an overall small footprint. 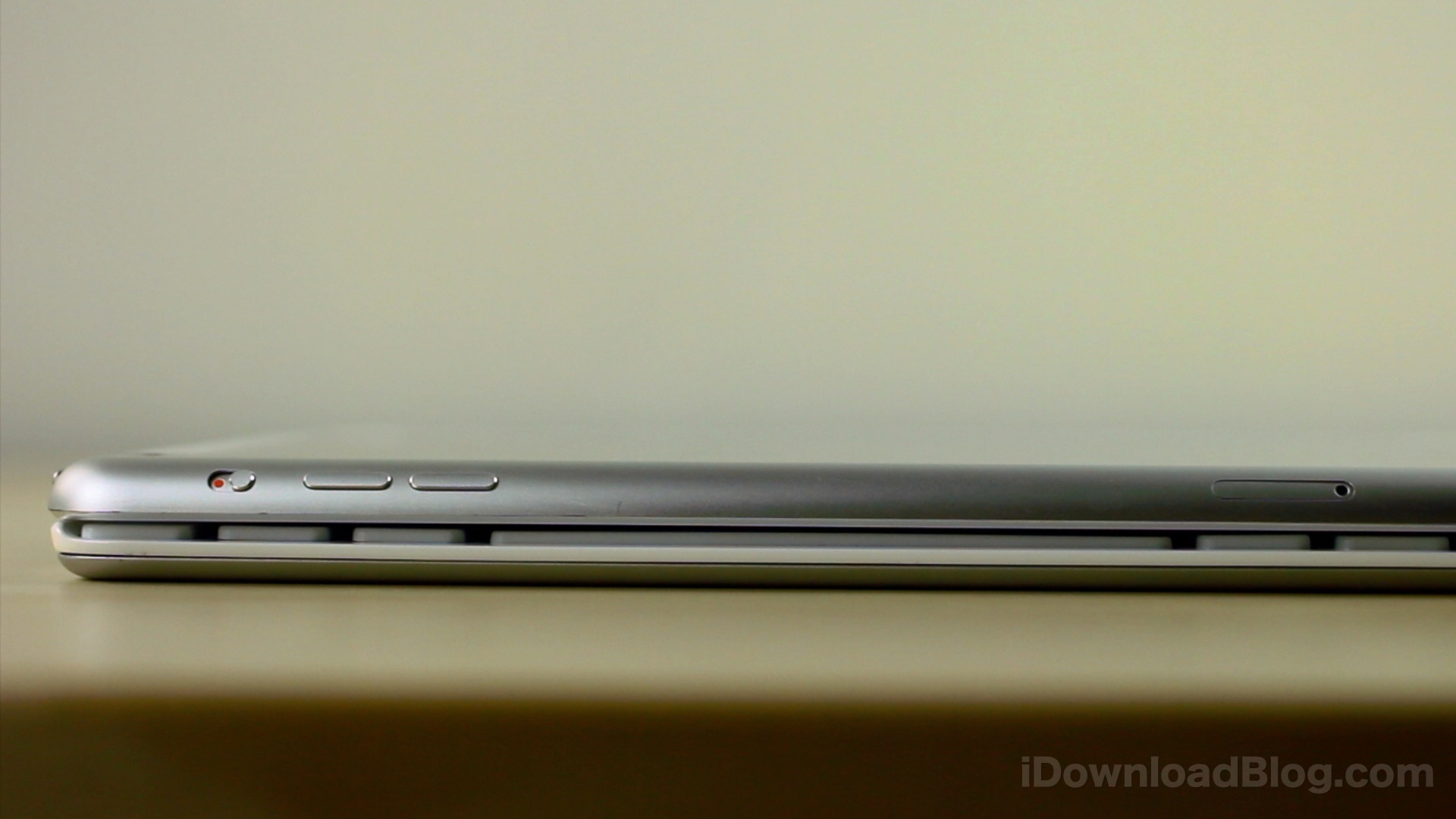 Using the Ultrathin keyboard requires you to separate the two devices from the magnetic hinge, and dock the iPad mini in the little slot designated for the tablet. The dock, too, is magnetized, and is best served when the mini is firmly mounted in landscape mode. The magnets of the dock mean that I was able to hold the entire setup via the iPad mini without the keyboard falling off, and, if careful, vice versa.

Pairing the device is as simple as it gets. Just turn on the unit, ensure Bluetooth is enabled on your iPad mini, and press the keyboard’s pairing key. The instruction manual says that you’ll be prompted to enter a four-digit code, followed by the Return key, to finalize the pairing, but I wasn’t even prompted for a code.

The big question here, is how does the Ultrathin mini perform when typing? I found that there was definitely a learning curve, and an adjustment involved, but after a while, typing felt mostly natural.

First of all, you’re going to have to get used to the keys, because they’re quite a bit smaller than full sized keyboard keys. Remember, Logitech had to make all of the necessary keys fit in the footprint the size of an iPad mini, which is no small feat. You’ll find that some of the keys — I’m looking at you apostrophe and semicolon — are about one third the size of a normal keyboard key. They’re really small, and it took me a few days to really get used to using them effectively.

Another thing that’s going to take some time to get used to, is the placement of the keys. For example, the Caps Lock key shares the same key with the letter A key, which means that key is larger than every other key on the keyboard, except Return and Spacebar. This, coupled with the location of the Control key — situated to the right of the Spacebar key — took some additional getting used to. But that’s the point, it took some getting used to. By now, a few days later after first using the keyboard, I totally get it. 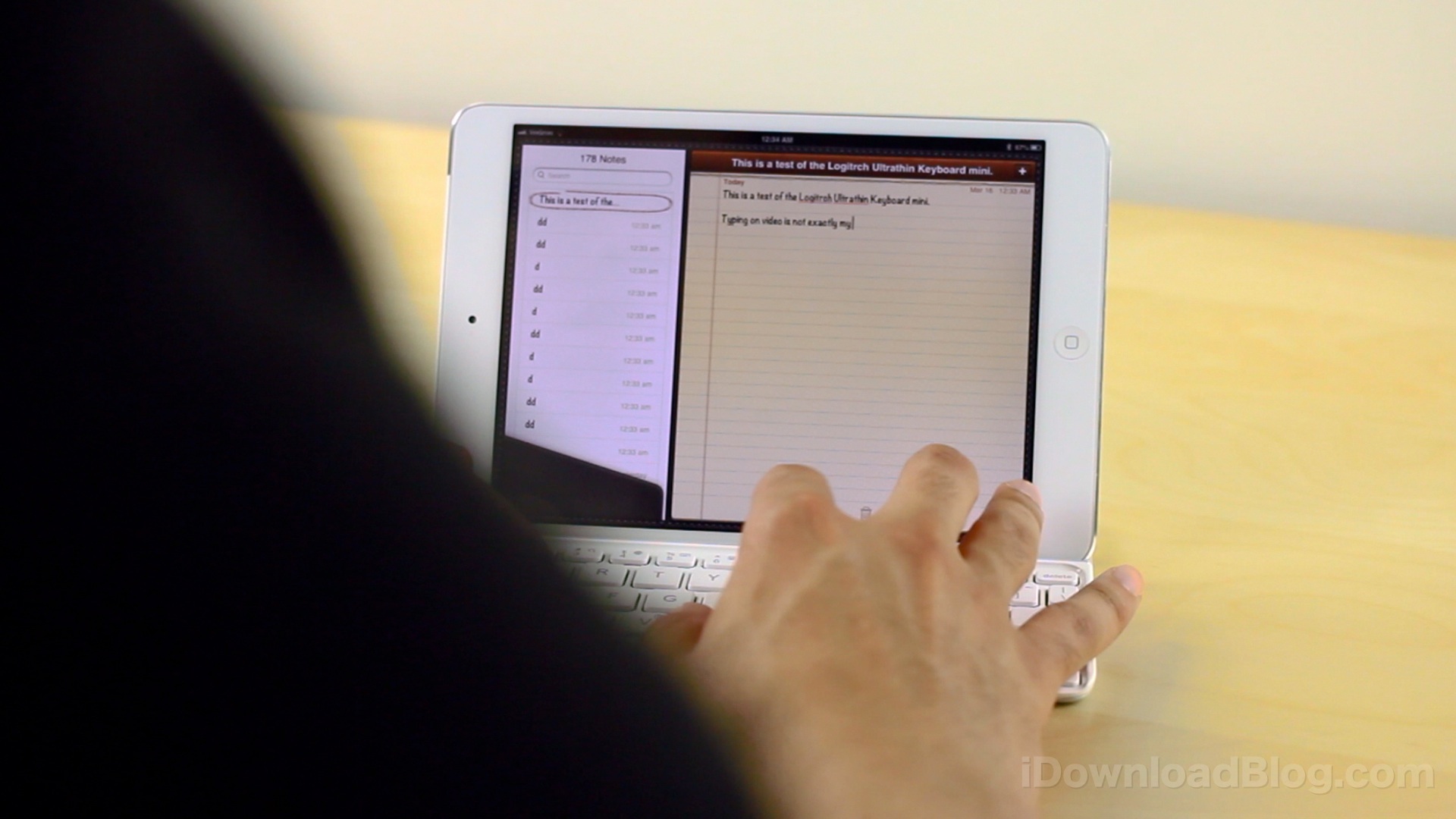 The keys themselves are extremely good. There’s excellent key movement and depth when you press a key on this keyboard. It feels similar to the standard MacBook Pro keyboard, though obviously, devoid of the ample spacing. I found that there’s simply not a lot of mistakes to be made when typing on this keyboard, meaning you won’t accidentally press a T when you meant to press a Y.

That being said, you will have to adjust the way you type, especially if you have large hands like me. It can be a bit frustrating at first, but after a few days usage, the learning curve drops significantly.

Forget about using the standard keyboard finger position, because the keys are too small to accommodate that. Instead I used a style of hybrid hunt and peck. Eventually I could type reliably without needing to look at the keys. It’ll take a while to adjust, but once you do, it’s fine.

In the end, I was really shocked at how fast I could knock out a blog post utilizing such a small surface area. After a bit of usage, it didn’t feel like I was compromising or sacrificing that much. On the contrary, I was truly free, truly mobile and ready to work anywhere. Best of all, battery life was no longer of chief concern to me.

Although most people will primarily focus on the keys, and rightly so considering the size discrepancy, one aspect of the Ultrathin mini that I feel has been overlooked, is the viewing angle. Logitech obviously worked hard to perfect the iPad mini’s viewing angle when docked in the cover. What’s even better, is the fact that I can actually use my mini like a laptop. Literally. I can sit the device on my lap like a traditional laptop, and bang out a few hundred words like nobody’s business.

No, it’s not as convenient as a full sized laptop keyboard, and the varied viewing angles that come with it, but there are also many advantages to working this way:

Whether or not those things matter to you or not is going to take some thought, but it’s definitely something worth considering.

This keyboard is scary good, and competitors are going to be hard pressed to top Logitech’s efforts here. The build quality, the look, the feel, the response of the keys. You can tell these guys didn’t skimp or cut corners in order to save a few bucks.

iPad users will also be happy to know that there are a few dedicated iPad keys to interface with iOS on this keyboard. There are shortcuts for search, Home button, Input Language, Lock screen, Software keyboard, slideshow function, cut, copy, and paste. There are also the standard keys for controlling music, and adjusting screen brightness. 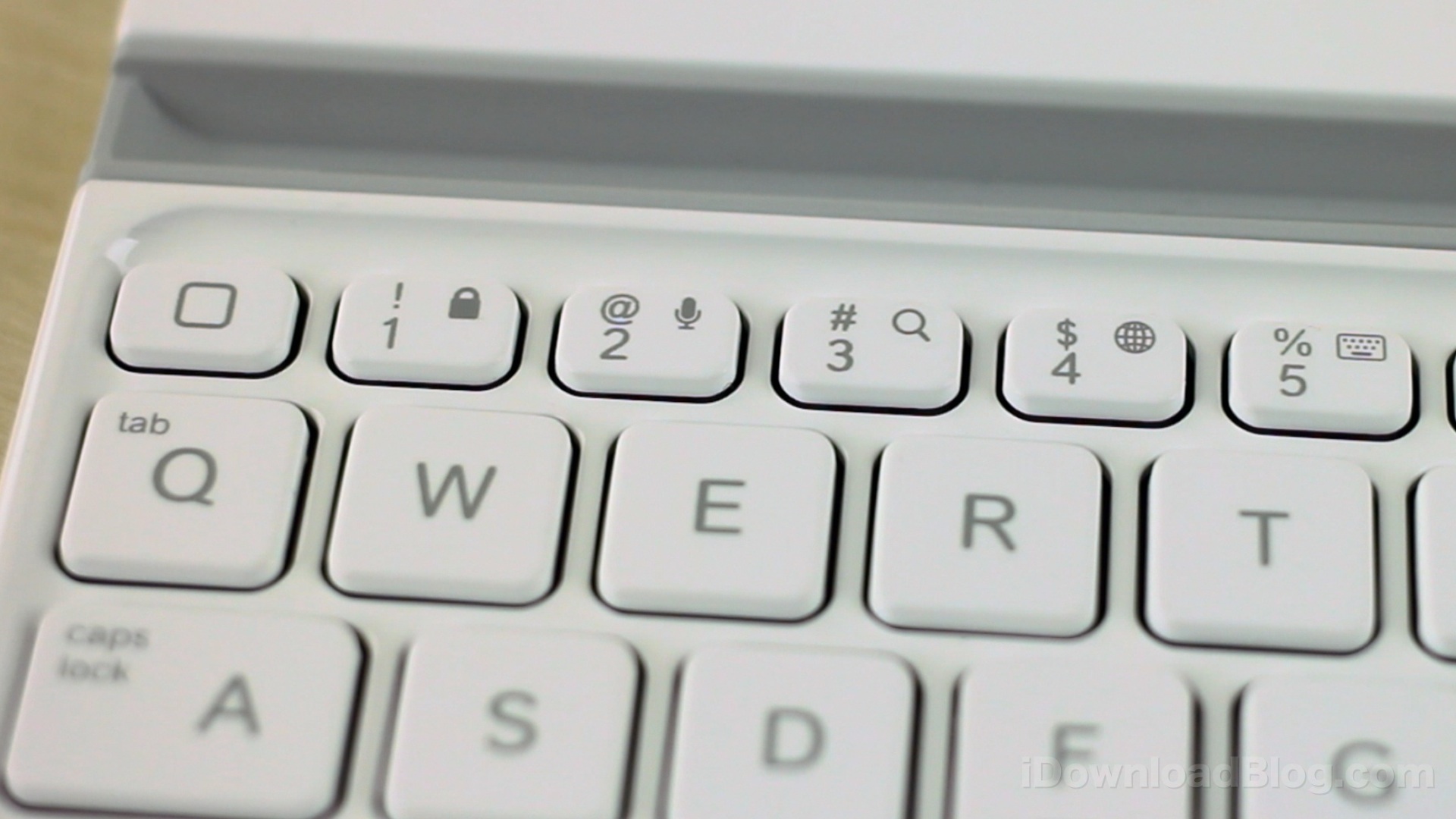 The unit comes bundled with a USB charging cable, and a cleaning cloth. According to the instruction manual bundled with the unit, a full charge warrants a whopping three months of battery life with two hours of usage each day. Logitech recommends that you turn the unit off when not in use, but I’ve been using it heavily for a week, and have simply relied on the device’s sleep mode. So far, there’s still plenty of juice left.

No, I haven’t tried many other keyboards for the iPad mini, but I can say that I’ve used one that truly seems perfect to me. I can type at a much higher rate of speed that I can with the software keyboard, on a device that’s low profile, and matches the iPad mini’s good looks.

As someone who’s determined to make blogging from the iPad a workable solution, the Logitech Ultrathin keyboard mini seems like the ultimate compromise between style, form, function, and overall usability. If you told me something better exists out there on the market right now, I’d have a hard time taking you seriously.

The Logitech Ultrathin Keyboard Cover for iPad mini is available in white or black for $79.99 on Logitech.com.

Oh, and yes, here’s the obligatory “I typed this whole post using the Ultrathin mini.” Holler at me in the comments section.