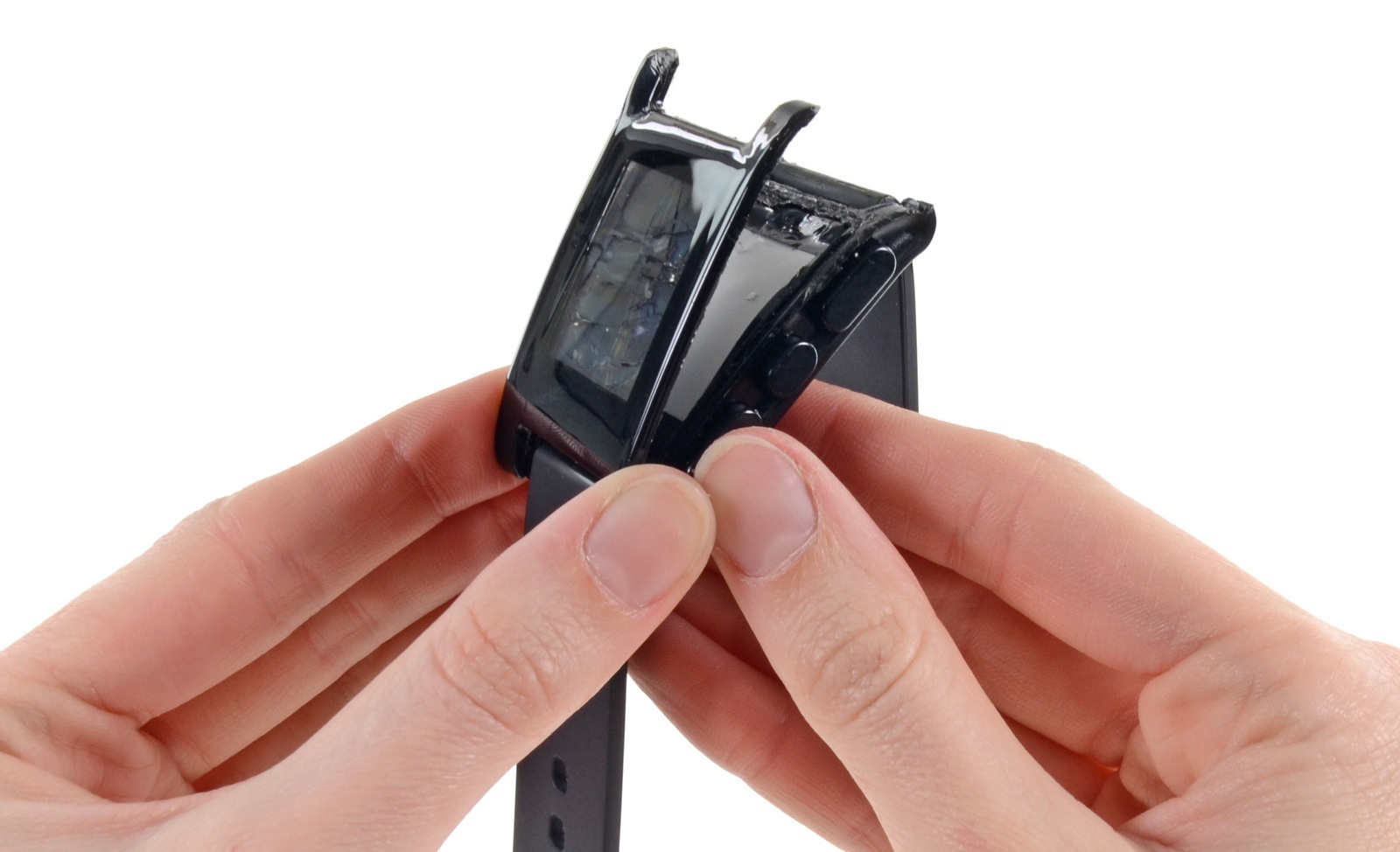 Perhaps in a slight indication of the kinds of limitations we could expect from Apple’s rumored iWatch, repair wizards over at iFixit tore apart the Pebble smartwatch, having concluded that the components are so densely packed in such a tiny space that the gizmo is not repairable at all. As a result, iFixit refrained from giving the Pebble a repairability score in the first place.

And because the makers of the Pebble smartwatch had to use excessive adhesive for waterproofing, the battery is “very inaccessible” and there’s no way of prying open the device “without compromising the display”…

According to iFixit, the product “employs tons of adhesive to keep water, and tinkerers, out.” Couple that with a bezel around the screen and separating the cases without compromising the display becomes literally impossible.

We manage to part the cases, leaving the stubborn smartwatch in only slightly better condition than if we had bombarded it with actual pebbles until it popped open.

The Pebble’s innards are housed in a single simple assembly, boxed within a light plastic frame. Its Fullriver battery is rated at 3.7 Volts and 130 mAh, with the Pebble-rated performance of over seven days on a single charge.

iFixit estimates that the battery’s inaccessibility limits the device’s lifespan to about 6-10 years. So, when the battery dies, you’ll have to purchase another Pebble, I’m afraid. 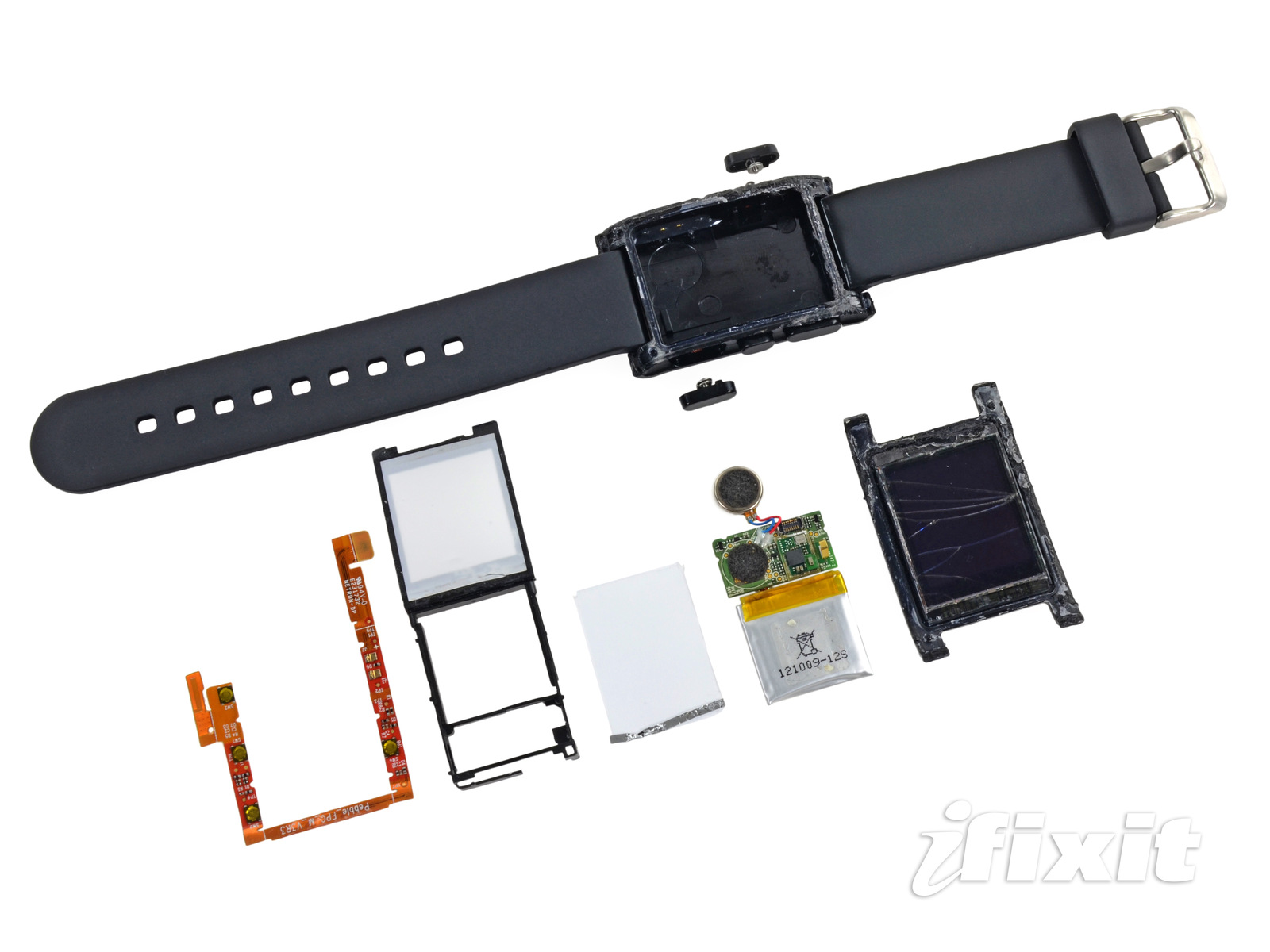 iFixit couldn’t find signs of Bluetooth Smart (or Bluetooth 4.0) support, despite the company claiming the functionality will be enabled via a future firmware update.

The backside of the motherboard contains a Panasonic RF module which should support both regular Bluetooth and Bluetooth Low Energy (BLE) functionality. However, digging deeper reveals a Texas Instruments chip which, according to its datasheet, doesn’t support BLE.

“Word on the street was that Pebble had BLE functionality just waiting to be activated with a firmware update, but we can’t find evidence of the hardware to back up this hidden potential,” the repair experts note.

Pebble has responded and confirmed in a written statement that the watch does indeed support Bluetooth 4.0:

The Bluetooth chips TI sent to Panasonic were labeled CC2560 but have been flashed with the firmware (and BT LE support) of a CC2564. That’s why the module was labeled PAN1316. Many chip vendors make silicon consistent between product lines but simply flash different firmware to enable features.

Our chips were labeled CC2560 because TI asked us if we wouldn’t mind using them with CC2564 firmware to speed up our order. Pebble most definitely has Bluetooth LE support, though it has not yet been enabled in our operating system.

The Pebble smartwatch is available for $150.

It talks to Apple’s iPhone and Android smartphones via Bluetooth and through a dedicated app which supports notifications for incoming calls, emails and texts – and lots more with a jailbreak tweak called BTNotificationEnabler – on its 144 x 168 pixel black and white e-paper display.