Here’s some good news: research firm comScore Wednesday announced that during a three-month average ending January 2013 Apple crushed Samsung in United States smartphone sales. Specifically, the iPhone maker was the top US smartphone vendor with a 37.8 percent market share in January 2013, which was up 3.5 percentage points from October 2012. Samsung was second with a notably lower market share of 21.4 percent, a slight 1.9 percentage point increase from October 2012. All told, Apple’s 3.5 percentage point gain was Android’s loss as we see Google’s mobile operating system dropping for the first time. So much about the supposedly “weaker than expected” iPhone 5 demand…

I wonder whether the Wall Street Journal will care to spin this as bad news for Apple. 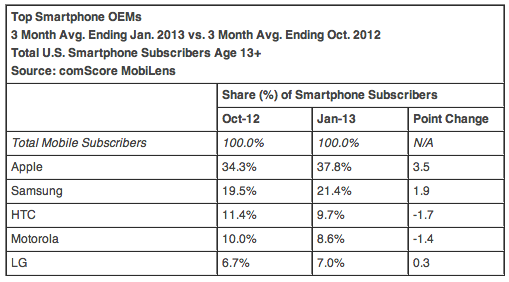 Android of course remains the top mobile platform as it is available across a vast range of form factor devices from a bunch of vendors, whereas iPhones are only made by Apple. But even though Android in January 2013 took 52.3 percent of the US mobile OS share, its share slipped 1.3 percentage points versus October 2013. 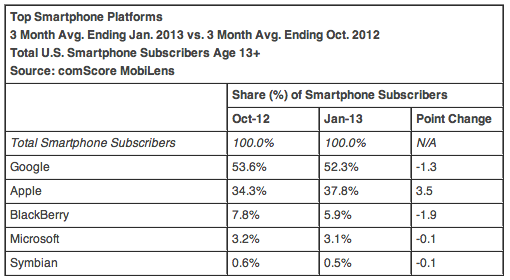 The data is derived from an online survey of a nationally representative sample of mobile subscribers age 13 and older and refers to a respondent’s primary mobile phone. It does not include data related to a respondent’s secondary device, like a tablet.

Another research firm, Strategy Analytics, previously found that the iPhone 5 and iPhone 4S each outsold Samsung’s Galaxy S III during the 2012 holiday quarter, making both devices the two most popular smartphones on the market in Q4 2012.

Furthermore, as comScore’s data examines the three-month period between October 2012, when Apple launched its iPhone 5, and January 2013, it brings into question suggestions by crazypants analysts that Apple is facing “weaker than expected” iPhone 5 demand.

These estimates are purely based on supply chain reports and Apple CEO Tim Cook warned that one should not take rumors about order cuts at face value.

“The supply chain is very complex and we have multiple sources for things”, he told analyst on a conference call. “Even if a particular data point were factual, it would be impossible to interpret that data point as to what it meant to our business.”

That’s not to say that iPhone 5 demand won’t weaken.

iPhone sales are prone to seasonality. Apple typically sees the strongest sales during the first two quarters of new model’s availability. Demand then tappers off in the following quarter, and especially the fourth quarter of availability as production of a next-gen model starts ramping up.