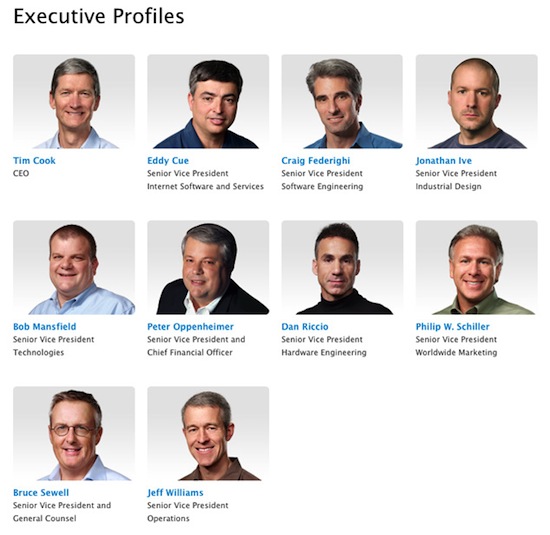 If you wanted to make sure that your business’ executive team was deeply committed to making it thrive, it’d probably be a good idea to make sure they held a lot of company stock. That way, their livelihoods directly depended on its success.

And that’s exactly the way it works at Apple. The company has amended its corporate bylaws to require that executive officers hold three times their annual (base) salary in AAPL stock, and it’s even higher for Tim Cook and his board of directors…

“Apple Inc. AAPL -2.12% in February reversed its stance on a corporate-governance measure related to executive compensation, implementing a new rule that executive officers must hold triple their base salary in company stock.

Apple’s new policy requires executive officers to hold three times their annual base salary in stock, and executives have five years to satisfy the requirement. The document also restates the company’s existing policy of requiring the chief executive to hold 10 times his annual base salary and nonemployee directors to hold five times their annual retainers, policies that were mentioned in the January proxy. Board members’ retainers start at $50,000 a year, and certain committee chairs earn more.”

In January, Apple’s directors urged shareholders to vote against the new policy, saying it could hurt the company’s ability to attract and retain executives, and “provided no benefit” since Cook and others already have stock-holding requirements.

Today’s news comes as Apple has been facing enormous pressure from shareholders anxious about the company’s sliding stock price—which was sitting at just over $700 in September, and is now at $431—growing cash pile and mounting competition.

On Wednesday, Cook said that he and his management team are very aware of the company’s declining stock price, but they are continuing to focus on the long term. He also noted that Apple is “seriously considering” returning more cash to shareholders.

What do you think of Apple’s executive stock-holding requirement? Good idea?