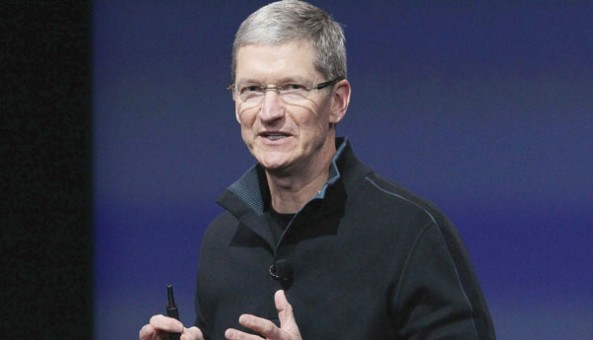 Apple held its annual shareholder meeting this morning on its Cupertino campus. The company used the gathering to address concerns of investors, offer up some insight into its future, and of course to vote on a number of proposals.

Tim Cook did a lot of the talking, and fielded some pretty difficult questions from shareholders who are obviously disappointed with Apple’s recent stock slide. As usual, we have a roundup of all of the interesting stuff after the fold…

Before we get to the Q&A section, let’s get the real business out of the way. Shareholders voted to reelect all board directors, but proposals to require executives to hold 33% of AAPL and to setup a human rights committee both failed.

After the voting was done, Cook shared his usual promotional stats and other comments (via CNBC):

As the Q&A session began, Tim talked a bit about Apple’s declining stock price. “I don’t like it either,” he said. “Neither does the board or management—where the stock trades now vs a few months ago—but we’re focused on the long term.”

This was a big question: “What is Apple going to do about Android and Samsung gaining marketshare?”

“We’re not constraining our investment in R&D by a desire to grow a cash pile. We stay very focused and work on a few things. The real market share numbers are hard to come by. It is clear that Android is on a lot of phones. It’s probably true that iOS is on a lot more tablets. Success is not making the most. Where market share is important is in being big enough to attract an ecosystem. We’re really aware of the competition as well. We don’t have our heads stuck in the sand. There’s a button or two we could press to make the most. But that would not be good for Apple.”

So was this one: “What is the current status of the spaceship-like Cupertino campus project?”

“Steve put a lot of work into this before he passed away and we’re continuing that. We think we can get a third of our employees there by bus. We hope to break ground later this year. Today, 80% of the site is covered in asphalt and concrete; when we’re finished only 20 percent will. We plan to bulldoze all of the buildings on the new site, and build one 2.8 million square foot building that will provide the most collaborative work environment. I project that we will move in, in 2016. “

And finally, someone bluntly asked what Cook thought about the lawsuit from Greenlight Capital’s David Einhorn regarding Apple returning some of its $140 billion to its investors. “Do you still think David Einhorn’s lawsuit is silly?”

“I absolutely do. I strongly believe it was a silly sideshow, regardless of how the judge ruled. I don’t, however, think the issue of returning cash to shareholders is silly—we’re seriously considering it.”

The fact that Apple is still considering giving back cash should appease shareholders, who were undoubtedly let down when rumors of Apple splitting its stock didn’t materialize. AAPL actually spiked 5% yesterday on the back of the chatter.

So to recap: Cook is well aware of Apple’s competition and the troubled state of its stock, but he’s staying the course. The company is on track to move into its new Cupertino campus in 2016, and is surprise, “looking at other product categories.”

To me, Tim Cook always sounds like a veteran CEO. And I can’t believe that between his leadership, and Apple’s record-breaking sales last year, that AAPL has dropped some 250 points. Most companies would kill to have either one. Apple has both.

What are your thoughts on Cook at this point?