A new document, submitted to court in connection with a drug investigation, has been discovered that provides a rare look at the amount of data the government can pull from a seized iPhone using advanced forensic tools.

Of course, we all know that phone searches are a common law enforcement tool. But up until now, we’ve mostly been in the dark regarding what information the government can grab with this invasive search technique… 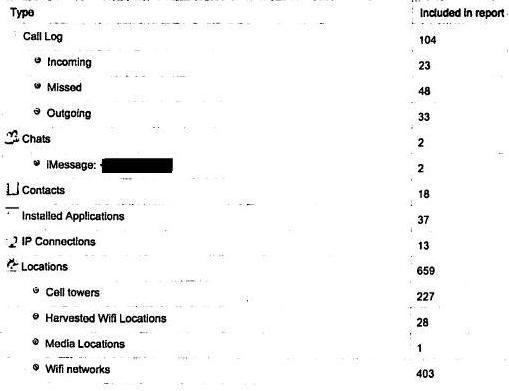 “Last fall, officers from Immigration and Customs Enforcement (ICE) seized an iPhone from the bedroom of a suspect in a drug investigation. In a single data extraction session, ICE collected a huge array of personal data from the phone.”

As you can see in the image above, the ICE team was able to pull call activity, contact information, stored text messages and voicemails, photos, videos, passwords and over 650 geolocation points from the suspect’s iPhone.

That’s pretty crazy when you think that before smartphones came around, it was nearly impossible for police to gather all of this intel—who you’ve been talking to, the places you’ve been. Now all it takes is a computer session.

The scariest part of it all is that in most states, police aren’t required to obtain a warrant to run this forensic software. And with their mobile Cellbrite machines, it’s possible that they could do so during a routine traffic stop.

No, ACLU isn’t saying you should throw away your phone and sit in your room with a tinfoil hat on your head. But it is trying to spread the word about this poorly regulated practice, and it suggests you use a passcode on your iPhone.