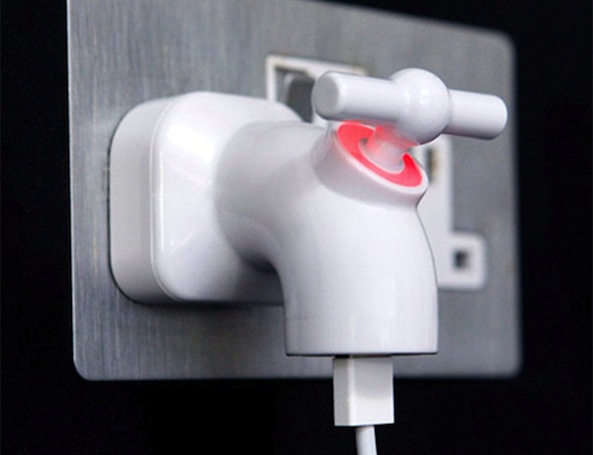 There’s nothing more boring than an iPhone wall charger. It’s a plug, and it charges things when a USB cable is attached to it. That’s about as glamorous as it gets. Until now.

Meet iTap, the latest and greatest thing in the world of charging. It quite literally keeps electricity on tap. Well, not a real tap. That would just be silly! The photo above should be able to sell the idea of the iTap much more successfully than any text we can put together, it is a tap plugged into a wall after all…

Once plugged into a wall outlet, the iTap has a light on the top which turns red when the handle is rotated to begin charging and blue when reversed. It’s a little feature that’s arguably completely unnecessary, but one that made us smile regardless. Anything that lights up has got to be a winner in our book!

On the underside of the tap’s spout is a standard USB port, which means the iTap can actually charge almost anything. If you want to charge your iPhone or iPad, you can, and if you’ve got one of those Android things then we’re sure that will charge too. You know, if you really must.

The iTap is priced at £19.95 (around $31) from PressyBox and is currently available for pre-order. The charger itself appears to be made from the same bright white plastic as standard Apple chargers too, so it should fit in just right.

It doesn’t get much cooler than this folks. Well, maybe it’s just as cool as this coffee mat charger.