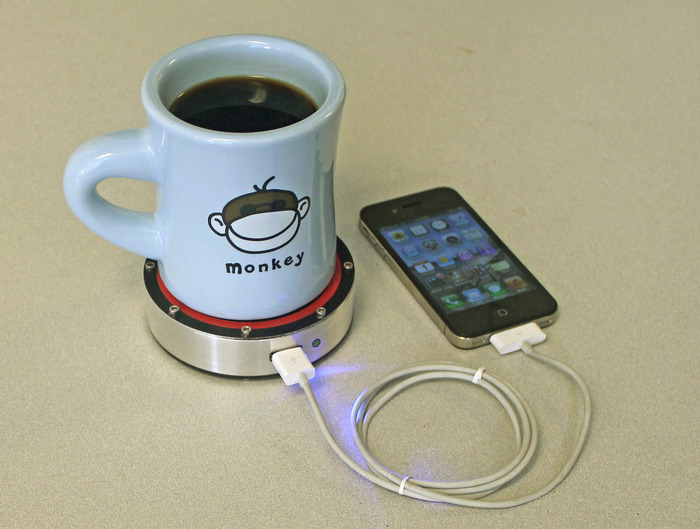 I’ve covered a lot of Kickstarter projects in my day, but I have to say that this is one of the most interesting I’ve ever come across. The Epiphany onE Puck, by Epiphany Labs, is a drink coaster that can actually charge up your iPhone (or other device) using ‘heat disparities’ from a hot or cold beverage.

That’s right, there’s no outlet or batteries involved. Just set your drink down on the coaster, plug in your smartphone, and watch the magic happen. The coaster uses a shrunken down stirling engine to harness the aforementioned disparities into charging power. And the creators say this is just the beginning…

The team at Epiphany Labs has some pretty big aspirations for the tech used in the onE Puck. Eventually they’d like to take the knowledge they gain from making this accessory and use it in much bigger applications, building even bigger sterling engines to power appliances, and one day entire households.

But back to the coaster. The Epiphany onE Puck is lightweight, portable, and it can charge any iPhone, Android phone, or other device that uses a USB charger at 1000 mA or less—so no iPads or laptops. How long it takes depends on how hot or cold your drink is. Under ideal conditions, it’ll charge at normal speed.

The project launched on Kickstarter just 10 days ago, and it’s already near its goal of $100,000. If you’re interesting in snagging a onE Puck, a pledge of $115 gets you on the pre-order list (all of the $99 packages are gone). Unfortunately, it’ll be a while before you see it, estimated delivery date is March 2014.

I myself probably won’t be getting one. $100 for an accessory I don’t need, that I won’t see for a year, is pretty steep. But I have to say, the work these guys are doing is extremely fascinating. And I’m rooting for them to not only succeed with this Kickstarter project, but in their future endeavors as well.

What do you think about the Epiphany OnE Puck?