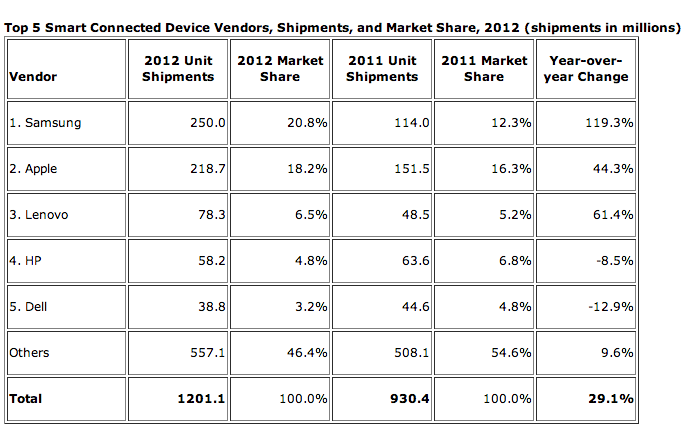 Reports quite rightly label 2012 ‘The Year of Samsung.’ The South Korean smartphone and tablet maker is described as a ‘juggernaut’ with triple-digit growth last year, making it the top producer of smart devices, according to a Friday report. But if you thought Apple was ready to retire, you’d be wrong – thanks largely to monster holiday sales and that dynamic duo: the iPhone 5 and iPad mini.

Samsung saw its market share for all of 2012 jump nearly 120 percent, to 20.8 percent from 12.3 percent in 2011, according to research firm IDC. Meanwhile, Apple used the traditionally busy fourth quarter to move within about 1 percent of its South Korean rival…

Normally, growth of 44.3 percent is something to hail, but these are not normal times as the PC industry comes crashing down about our ears.

Third place China-based Lenovo is in the midst of moving from a portable PC maker to smartphones. HP lands in fourth spot, its 2012 shipments hurt by a lack of smartphones or tablets, according to ID. Rounding out the top five smart device vendors is Dell, which saw growth for 2012 drop by nearly 13 percent.

“Smartphones and tablets are growing at a pace that PCs can’t realistically keep up with,” Ryan Reith, IDC program manager, said. PCs are facing a two-prong problem: tablets and smartphones are getting more inexpensive and consumers are upgrading the devices faster than they are replacing their desktops and laptops.

Indeed, IDC found only PC makers such as HP and Dell were in negative growth.

“We expect smartphones to continue to carry a shorter life cycle than PCs for the years to come based on price, use case, and overall device size,” he adds.

On what other factors could PCs possible compete?

All of which sets the stage for tablets and smartphones, best viewed as a battle between Apple and Samsung. The language used by IDC analysts even took on the quality of a match between two titans. For instance, take a look at IDC’s expected fourth quarter numbers and then listen to the analysis. 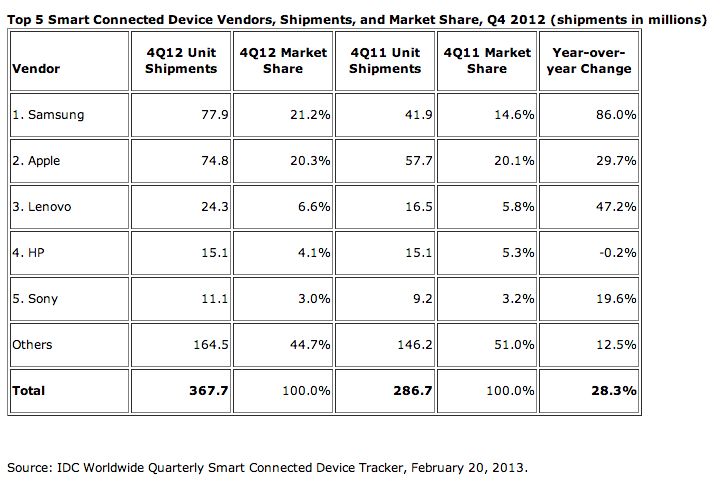 “The fourth quarter market share numbers showed a fairly dramatic resurgence for Apple,” Bob O’Donnell, IDC program vice president, explained. The come-back can be credited to Apple release of a new smartphone and tablet just ahead of the shopping period.

After falling well-behind Samsung in early 2012, Apple came roaring back in the final quarter of the year thanks to its latest hits – the iPhone 5 and iPad mini – and reduced the market share gap to less than a single percentage point.

However, Apple cannot rest on its laurels. In the technology sector, it’s all about what have you done lately. “The question moving forward will be whether or not Apple can maintain its hit parade against the juggernaut of Samsung,” he noted.