Millennial Media becomes the latest to release research showing 2012 was a year of rising adoption of tablets and smartphones. Apple continues to lead the charge in tablets – particularly the iPad mini – while Samsung has become the popular face for the family of Android alternatives.

Apple held on to its tablet lead with 58 percent of the market. About a half-dozen Amazon tablets helped Google’s mobile operating system capture 41 percent of tablets, with Samsung the most significant player…

As the chart illustrates, Samsung has nearly half of the Android pie slice, with Amazon’s Kindle Fire garnering 26 percent. Motorola’s 6 percent, followed by 5 percent each for Acer and Asus rounds out the top five tablet firms.

According to the report (PDF version available here), Apple has the iPad mini to thanks for holding onto its tablet lead. Ad impressions for the device grew on average by 28 percent each day, just weeks after launching. That speed tops the 19 percent daily average experienced by Amazon when the Kindle Fire began sales in 2011. 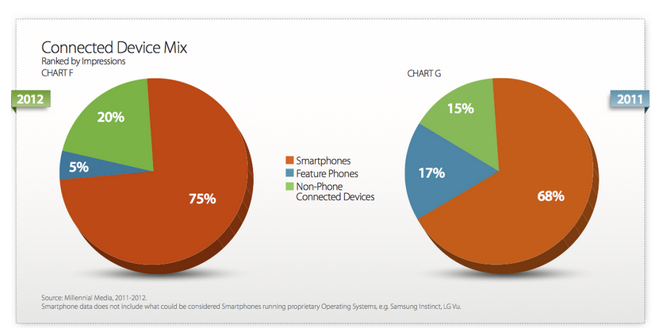 In handsets, we see  smartphone growth reach 75 percent, up from 68 percent in 2011. By contrast, the share held by feature phones slipped dramatically, falling to 5 percent from 17 percent in 2011.

We’ve noted before that while Android has the numerical edge, Apple’s iPhone continues to land at the top of the list. The mobile ad network firm confirms this. While Android smartphones were among many of the 20 top handsets during 2012, the Apple iPhone “generat[ed] an outsize helping of traffic share from just a few core devices,” as TechCrunch put it Friday.

Indeed, Apple was able to retain the top spot in 2012, increasing its share to 15.59 percent, up from 14.67 percent in 2011. In terms of overall mobile share, Apple grew even more, reaching 31.2 percent, up from 26.35 percent, according to Fortune’s take on the Millennial numbers.

The take-away: We are seeing the last breath from feature phones, as the relic of a bygone mobile age gives way to smartphones. Combine this with the shrinking demand for laptops and we are quickly headed for the bifurcation of mobility: tablets and smartphones.

The future is already in sight as some urge tablet makers to adopt phone functionality in so-called phablets. There has been some indication that Apple could follow this trend with a 2014 release of a nearly five-inch iPhone.

It appears users are warming up to the idea of an iPhablet, with more than half the respondents in our non-scientific poll voting they would buy one.