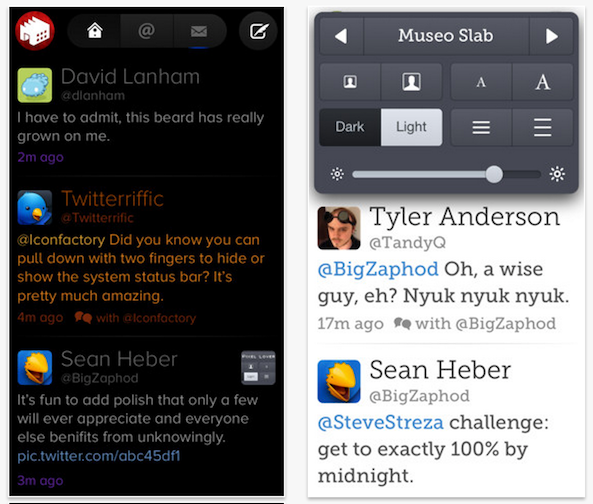 In December of last year, Iconfactory introduced an all-new version of its popular iOS Twitter client, Twitterrific 5.0. The app was completely rebuilt from the ground up with a fresh user interface and a laundry list of features.

Today, that list of features gets even longer with Twitterrific 5.1. The update posted late last night, and it includes several new features and improvements such as mute filters, and more. We’ve got the full change log after the fold…

• Faster load times when refreshing timelines
• Improved scrolling speed, especially with tweets using inline previews
• Markers now scroll when loading more to fill gaps
• Send tweets, set favorites, etc. while offline: you’ll see an option to perform them later
• Links in user profiles are now displayed correctly and can be tapped
• Mobilizer & share buttons no longer wait for a page to load before appearing
• Added timeline previews for Flickr photos
• Flickr photos now display in a slideshow view
• Lists are hidden in the sidebar if you don’t have any
• Sidebar appearance is now themed to match the timeline
• New tweet count is now shown when refreshing saved searches & lists
• VoiceOver: Compose counter notifies you when nearing the character limit
• New gesture: Drag downwards on photos or modal navigation bars to dismiss
• New gesture: Tap & hold location icon in compose to use it for all tweets you send from that account
• Saving links to Pocket now attaches the tweet attribution
• Proxima Nova updated with alternate ‘a’ font character
• Various other UI tweaks

• Shiny new pull to refresh animation to avoid mistaken identity with brother from another mother, Larry

Admittedly, that last line is rather strange. But 9to5Mac suggests that it might be a hint that push notifications on are the way. Nevertheless, as you can see above, this is a sizable update, and it should appease any Twitterrific fan.

I’m still a Tweetbot fan myself. But I’ve purchased the new Twitterrific, and I install it from time to time when I want to change things up. It’s a solid, cross-platform client, and it’s only going to keep getting better with each update.