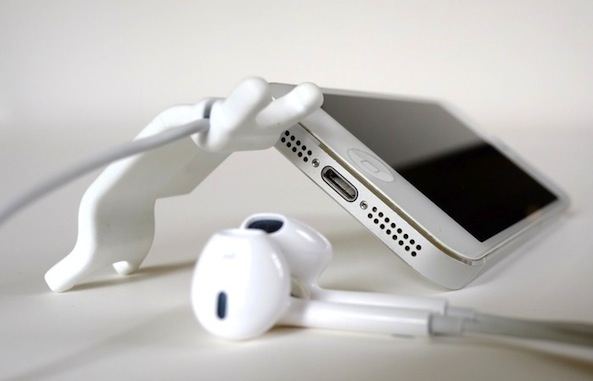 What you see in the photo above is the new Smarter Stand for the iPhone and iPod touch. Created by Dotan Saguy, it’s a dual-purpose accessory that acts as both a kickstand for your iOS device and a spool for your earbuds, so they don’t get tangled.

It may not look like much, but don’t underestimate Saguy’s knack for turning simple ideas into hit products. He’s already done it once with the Smarter Stand for iPad, raising over $150,000 via Kickstarter. And now he’s looking to do it again…

What sets apart the Smarter Stand from other kickstand accessories is the unique way it attaches to the handset: using its headphone jack as an axis. Not only does this allow you to prop your device up at any angle, but it also works with most cases.

Additionally, the Stand doubles as a spool for your Apple earbuds, or new EarPods, keeping them tangle-free and making it much easier for you to carry them with you. Unfortunately, due to the uniqueness of the plug-in, it doesn’t support other headphones.

The Smarter Stand project is off to a great start. It’s only been live for a day, and it’s already raised $10,000 of its $15,000 goal, with two months to go. If you want to get in on the action early, a pledge of as little as $9 gets your name on the pre-order list.

What do I think of the Smarter Stand? Well it’s elegant, well-designed and inexpensive—everything you’d want in an iPhone accessory. And it’s creator, Dotan Saguy, has already proven successful. If you’re interested, I see no reason not to back the project.

What do you think of the Smarter Stand for iPhone?