He is scheduled to speak at approximately 7:15am Pacific, 10:15am Eastern time, just after the markets open. Apple will provide a live webcast of its CEO’s talk in the streaming Quicktime audio format here.

Cook also gave a presentation at last year’s event, with Apple posting audio of the full talk shortly after the event had wrapped up. We’re expecting lots if interesting tidbits tomorrow as Cook lets us in on some valuable insight into Apple’s business..

In other words, remarks that were going to be delivered after the markets closed Tuesday will now be given while the markets are still open.

The prominent blogger suspects the re-scheduling might mean “Cook has something to say that will materially affect Apple’s stock price”. Another hint: this year’s presentation comes just days before Apple’s annual shareholder meeting.

Cook spoke at the annual event several times in the past.

Last year, he said he expected Apple would hit a billion cumulative iPhone units by 2015, with approximately 25 percent of that coming from China and Brazil.

Cook also hinted Apple might be interested in creating something “special” to make “TV a serious category for Apple.” 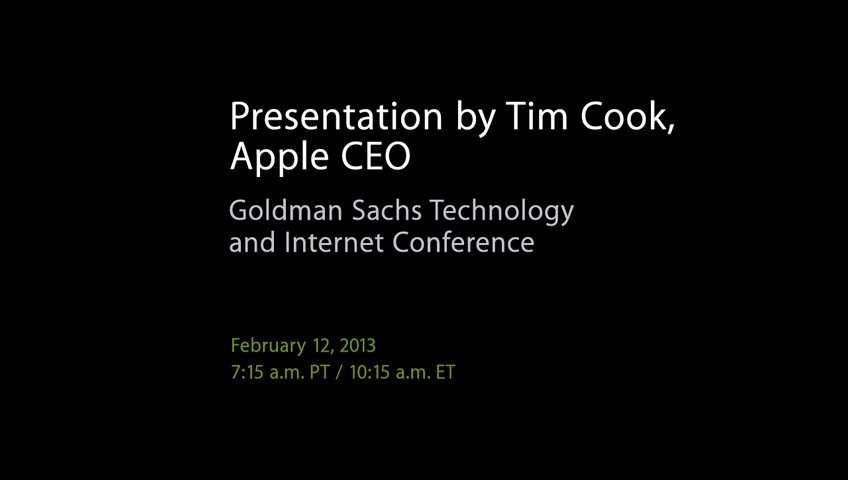 Here’s a nice extract from the full transcript of his 2012 Goldman Sachs talk where he addresses concerns that rival tablets from Amazon were undercutting the iPad.

Price is rarely the most important thing. A cheap product might sell some units. Somebody gets it home and they feel great when they pay the money, but then they get it home and use it and the joy is gone. The joy is gone every day that they use it until they aren’t using it anymore. You don’t keep remembering “I got a good deal!” because you hate it!

At the end of the day, people want the great product. Amazon is a different competitor. They have different strengths. They’ll sell a lot of units. They have and they will. But, the customers that we’re designing our products for are not satisfied with limited function types of products.

I think history is about to repeat itself in smartphones.

Apple’s handset share in emerging markets like Brazil, Russia, India and China (collectively known as BRIC) is hovering in a single-digit range due to an influx of affordable Android handsets.

Topeka Capital analyst Brian White today opined that Apple could launch a less-expensive iPhone aimed at emerging markets as early as this June, priced at about $300 off-contract.

Currently, Apple’s most affordable no-commit iPhone is the $450 iPhone 4. Unlike the United States, wireless carriers in many markets worldwide tend to sell handsets unsubsidized.

People readily pay the full price because they are not bound by long-term contracts.

This allows users to buy chunks of prepaid minutes and data as they go.

The off-contract model also gives mobile users the freedom to switch to another carrier at any time by simply slipping in another carrier’s SIM card.