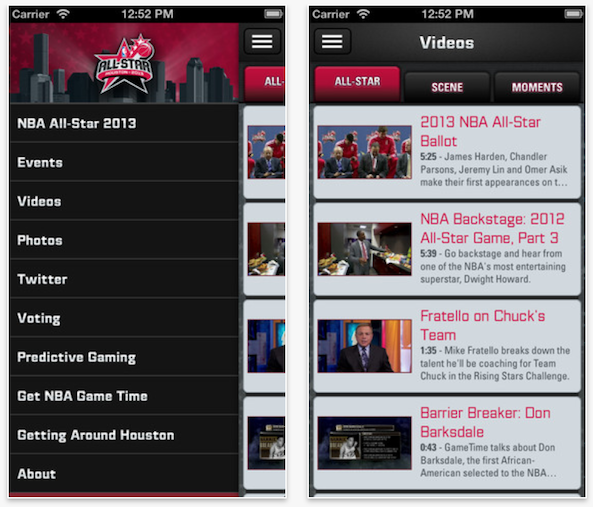 Good news NBA fans. We are now less than a week away from the three day showcase for basketball’s top players known as All-Star Weekend. The annual 3-day affair features several events, including the Slam Dunk contest and of course the All-Star game itself.

And thanks to The League, you’ll be able to follow along with all of the action right on your iPhone or iPad. The NBA is offering a free iOS app, NBA All-Star 2013, that will let you grab news, stats, photos and video highlights of all of this weekend’s festivities…

“The NBA All-Star 2013 App is the ultimate guide to All-Star. Keep up to date with event information, live scores, video and photos. Vote for your favorite players to win contests during the weekend and play predictive games.”

Believe it or not, the app is actually very well done. It looks sharp, loads content quickly and is very easy to use. The UI design kind of reminds me of Google’s recent iOS app offerings, like Google+. I particularly like the way it displays news stories in a feed-like stream.

Of course, new content is fairly limited right now. Sure, it has videos like ‘Kobe Bryant’s top 10 all-time highlights’ and news updates on player injuries. But the good stuff won’t start popping up until Friday, as All-Star weekend kicks off with the Celebrity Game.

Regardless, even the casual basketball fan will enjoy having this app around this week. So unless you just flat-out don’t watch the sport, I recommend checking it out. It’s available in the App Store for both the iPhone and iPad. And the best part is, it doesn’t cost anything.