There are times when it’s useful to know exactly how much battery life you have left on your phone. But since you’re not checking it every second, the percentage meter mostly just adds clutter to the status bar.

With the new BatteryPeek tweak in Cydia, you can have the best of both worlds: the tweak will hide the percentage meter, until you actually want to know how much power you have left…

BatteryPeek hides the percentage meter and installs a plugin for Activator. You can set the plugin to whatever gesture you want in Activator’s Settings page, but I currently have it set to Anywhere → Double Tap Right (on status bar). This way when you tap on the status bar’s battery icon anywhere, the percentage meter appears just long enough to be read and then disappears. 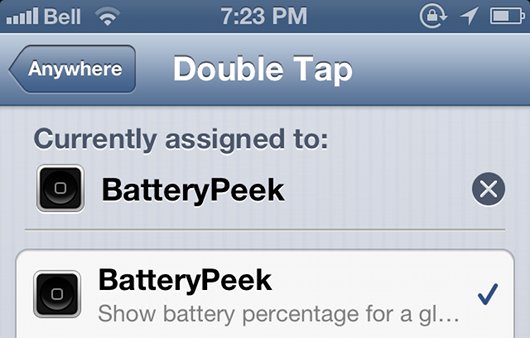 I tested the tweak on my iPhone 4 in iOS 6.1, but it should work on just about any device. BatteryPeek is freely available in BigBoss repository on Cydia.

Do you think the battery percentage should be hidden unless needed? Share your thoughts in the comments section.