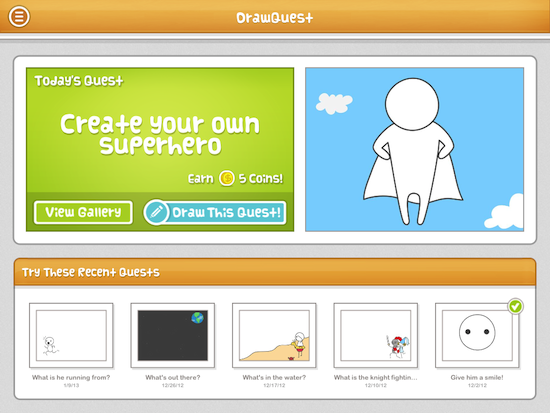 Looking around the collection of image boards known as 4chan, it’s hard to believe that the same person responsible for creating that, also created the app you see above. But it’s true, this is 4chan founder Chris Poole’s latest project: DrawQuest.

The premise of the app is pretty simple. Users are given daily ‘drawing quests,’ where they are asked to complete drawings by using only the tools provided. And once they’re done, they can share their drawings, view others’ artwork and more…

“Every day, people of all ages come together on DrawQuest to draw the Quest of the Day. What’s a Quest? It’s a challenge to use your imagination and complete a drawing.” Some Quest examples: ‘Dress up the snowman,’ and ‘create a superhero.’

Similar to the popular game DrawSomething, players are given these jumping off points for each drawing. But Poole explains that it’s not really meant to be a game. “There’s no concept of winning,” he says. “We want you to have fun with this.”

And that’s just half of what the app is about. The other half is about the community. Things are kind of limited right now, as the app is still in its infancy, but users can favorite and share pictures, follow others, and ‘play back’ drawings stroke by stroke.

I have to say that the whole concept is really interesting, and the app is surprisingly addictive. I downloaded it thinking I was just going to grab a couple of screenshots, and I’ve already completed 3 quests. But then again, I’ve always been a doodler.

If you want to check out DrawQuest for yourself, you can find it in the App Store for free.

What do you think of the app, cool idea?