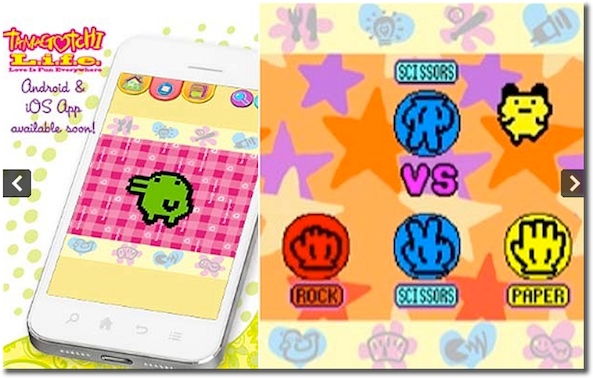 Unless you’ve been living under a rock for the past 10 years, chances are you know what a Tamagotchi is. The digital-pet-on-a-keychain was released by video game-maker Bandai in 1996, and has since sold more than 76 million units.

The fad, however, like an unfed digital pet, has passed away in recent years. But it looks like the popular toy is getting ready to make a comeback. Bandai has announced its upcoming title for iOS and Android called Tamagotchi L.i.f.e…

From Bandai’s blog (via AppAdvice):

“The original Tamagotchi was first released 16 years ago and took the world by storm. Everyone had a Tamagotchi and loved taking care of their digital pets. The new Tamagotchi app will feature the same gameplay you know and love with a number of exciting new features!”

The upcoming app will include a “Retro Mode”, which offers features similar to the original game, as well as more advanced options and related mini games. You’ll also be able to collect Tamagotchi shells and save every pet you raise.

The studio hasn’t given an official release date for Tamagotchi L.i.f.e yet, but all of its recent blog posts have ended with “The app will be released very soon. Stay tuned!” So we’re assuming that, barring any issues, it’s not too far off.

As cool as it is that Bandai’s resurrecting its digital pet line, I have to say that I’m not really digging it. It’s far too retro. And besides, if I’m looking at downloading a digital pet app, I’m holding out for Impending/Realmac Software’s Hatch.