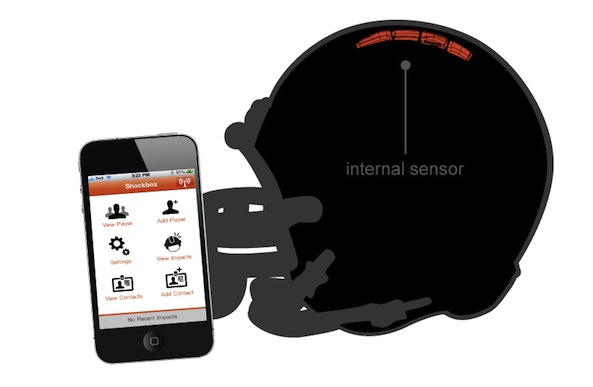 This is pretty interesting, and fairly relevant considering the Super Bowl is later today. The folks over at Impakt Protective have come up with a g-force sensor that fits inside a helmet, and measures the impact a player sustains from a tackle or collision.

If a player is hit too hard, the sensor, which is appropriately named the Shockbox, will send a color-coded alert to a designated iPhone or other mobile device. Impakt is hoping that this will help curb the growing rate of sports-related head injuries…

This is actually a major hot button issue in the NFL right now. Over 160 players went down with head injuries this past season, and research is showing more and more links between concussions and long-term brain damage, depression and even violence.

That brings us back to the Shockbox. The sensor can fit into any helmet, as long as there’s space within the interior padding, so that it’s right up against the frame. And it can be used in football, hockey, lacrosse, and other sports like snow and skateboarding.

As aforementioned, the sensor will send data to an iPhone (there’s also Android and BlackBerry apps as well) over Bluetooth, each time the player takes a hit. An orange alert will be sent for hits that measure over 50 G, and a red alert for all hits over 90 G.

Up to 128 Shockboxes can be paired to a single phone, so a coach or team manager could actually monitor an entire team. And believe it or not, there’s already a bunch of junior hockey teams, and even an NHL team, using the sensors to gather hit data.

All in all, I think Impakt Protective has a pretty interesting product here. It’s obvious that the head injury problem is only going to continue to grow worse as players get both bigger and stronger. So I imagine we’ll be hearing a lot more about this tech in the future.

If you’re interested in it now, though, you can find the Shockbox on Impakt Protective’s website for $149.