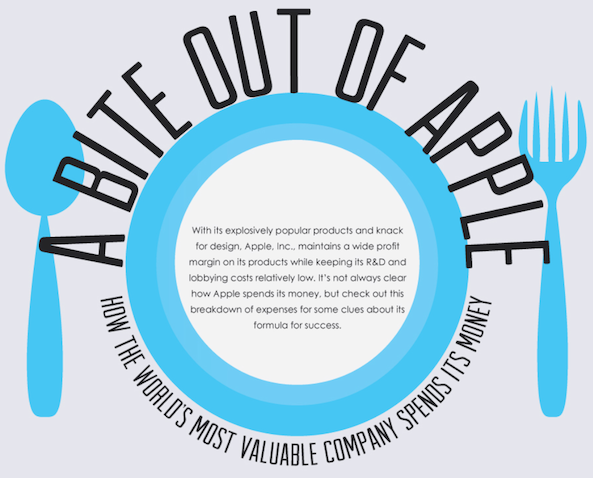 Despite the fact that investors have begun to worry about Apple’s future, the company is still one of the wealthiest in the world. The iPad-maker added another $13 billion to its cash pile last quarter, bringing the total to $137 billion.

And that number will only continue to grow, because Apple doesn’t really spend much money. Maybe a few billion on research and development, and another couple on data centers and other facilities. But not enough to make a dent…

The following infographic comes from the folks over at Master-business-administration.org, and it shows where Apple spends most of its money.

I find it interesting that Apple spends so much less than other big companies on things like advertising and D.C. lobbying. For example, it only spends $500,000 on lobbying expenses and Google spends $5 million. But then again, it is Google.

Also, if you needed any more proof that Apple is betting big on iCloud and other web services, just look at what it spends on data centers. It’s no coincidence that the $7.04 billion tab was one of the company’s largest expenses last year.