Do you have lots of contacts in Twitter, but aren’t crazy about limiting your tweets to 140 characters? Do you you use tweet expander services and URL shorteners, and find they’re more hassle than they’re worth?

TweetAmplius is a jailbreak tweak that takes your plus-sized tweets and automatically runs them through Pastie, Instapaper, and the URL shortener ‘is.gd’. The tweak plugs into the official Twitter app, as well as Tweetbot, if you prefer. TweetAmplius provides a seamless long tweet experience in iOS… 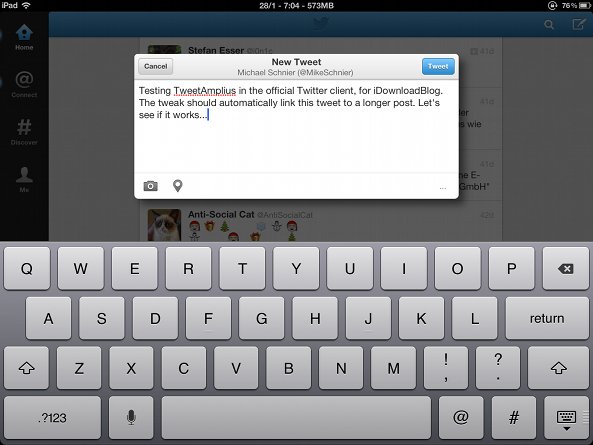 All you need to do to enable TweetAmplius is install the tweak from Cydia. From that point on, whenever you submit over 140 character, Twitter or Tweetbot will post the first few sentences along with an is.gd shortlink. When you exceed 140 characters, the tweak swaps the red character counter for three dots, indicating that the shortlink will be active in the post.

TweetAmplius should work on all jailbroken devices, provided they either have version 5.x of the official Twitter app or TweetBot version 2.6.2. You can find TweetAmplius for free in the BigBoss repository on Cydia. There are no Settings to configure. Just install the Tweak and open Twitter or Tweetbot.

Sure, you could buy a Twitter app with long Tweet functionality built-in, but as this tweak is free, it already works with two great apps, and it pulls off the long tweet functionality, TweetAmplius gets our pick. 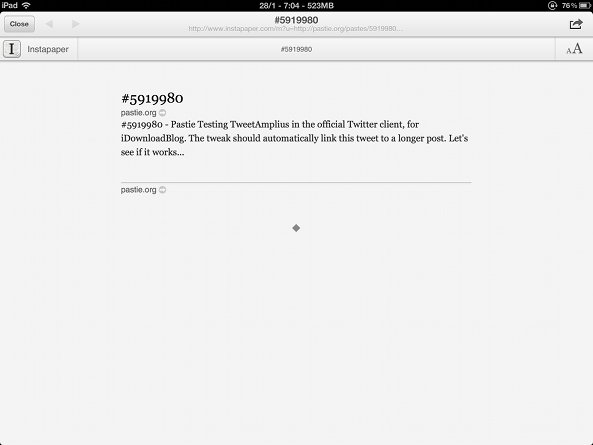 The finished long tweet to Pastie, viewed through Instapaper.

Do you find yourself going over 140 characters often on Twitter? You’ll have a bit more room to share your thoughts in the comments section.