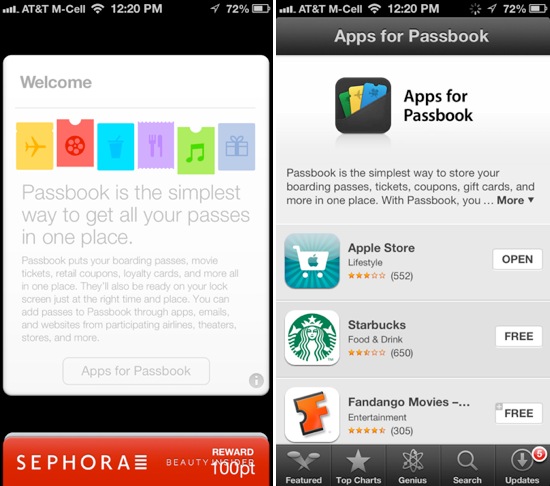 Apple released the long-awaited iOS 6.1 firmware this morning, and the update brought about a handful of changes. iPhones and iPads now support LTE on a number of new international carriers, and Siri can now order movie tickets through Fandango.

The new software also includes a minor change to the Passbook application. It seems Apple has restored the former “Welcome” screen in the app, making it easier for you to discover Passbook-enabled apps in the App Store…

Originally, in iOS 6, Passbook opened with a page with a link to a Passbook-enabled apps section in the App Store. But that Welcome screen disappeared once a Passbook supported app was downloaded, making it difficult to locate the section again.

However, as noted by MacRumors, iOS 6.1 has made the Welcome screen a permanent fixture in the app, and it can now be found in your Passbook, below your cards. Tapping the Welcome card opens up to a list of apps that use Passbook in the App Store.

Perhaps just as interesting is the number of apps in this section now. When Apple first launched its digital wallet in September, there were only a few apps that supported it. Now, there are more than 20 listed, with popular names like Fandango and Starbucks.

If you haven’t updated to iOS 6.1 yet, you can do so here. Don’t worry, it’s been deemed safe for jailbreakers.