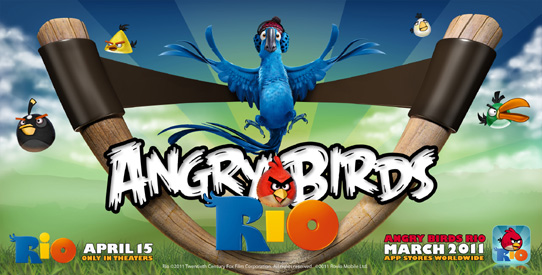 Good news! For the few dozen of you who haven’t, for one reason or another, played one of Rovio’s massively popular Angry Birds titles, it’s just been announced that the Angry Birds Rio game has gone free for a limited time. Both iPhone and iPad versions have been discounted to $0. More details and download links after the break…

From the App Store (via 9to5Toys):

“In Angry Birds Rio, the original Angry Birds are kidnapped and taken to the magical city of Rio de Janeiro, where they eventually escape their captors and set out to save their friends, Blu and Jewel – two rare macaws and the stars of the hit motion picture, Rio. Angry Birds Rio pairs the physics-based gameplay of the original game with unique twists based on the film.”

It looks like the reason behind the price-cut is that Angry Birds Rio has been made the ‘Free App of the Week,’ meaning it looks like you’ll have some time to take advantage of the special. It’s worth downloading though, even if you don’t plan on playing it now. The iPhone and iPad apps typically cost $0.99 and $2.99 respectively.

You can grab Angry Birds Rio for the iPhone and Rio HD for the iPad from the App Store.