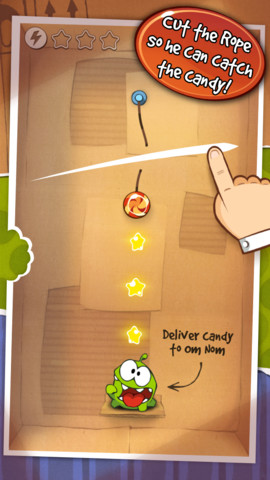 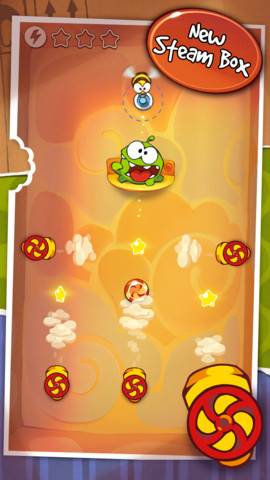 Released two years ago, it’s been downloaded 250 million times across platforms. With this new update, which is free to those who’ve purchased the game, Cut the Rope now sports a whopping 325 levels spread across thirteen boxes and Chillingo is promising more to come. Just like Angry Birds, Chillingo has been constantly adding new content to Cut the Rope with free content packs.

Rovio also yesterday updated its Angry Birds Space game with 30 new aquatic levels and while I’m a huge fan of the series, I must admit I’ve been feeling a little Angry Birds fatigue lately so this Cut the Rope update should keep me busy. It’s very entertaining and I love its charming characters and crisp graphics. If you haven’t already, I urge you to at least check out a out free demo version…

New Steam Box with 25 new levels, featuring a fun new way to get candy into Om Nom’s mouth – steam clouds that make candy float in the air and low-to-high pressure valves that control the amount of steam! Much like balloons, steam makes the candy rise and helps you feed the hungry green monster more candy!

Cut the Rope will run you 99 cents  for the iPhone and iPod touch version.

A high-definition build for iPads is also available, priced at four bucks.

Have you played Cut the Rope yet and if so, do you like it?