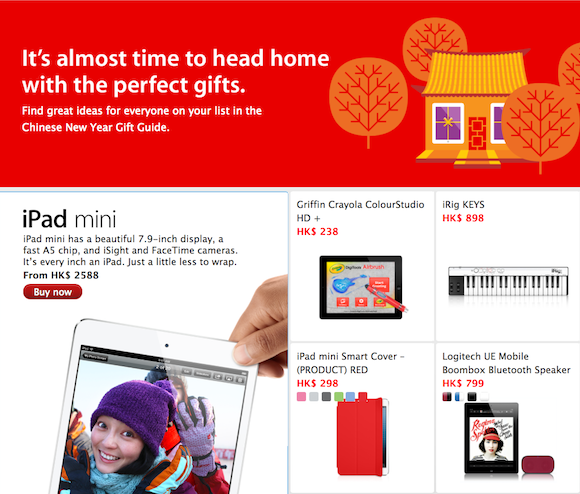 Apple is more focused on China now than it’s ever been before. Tim Cook is actually in the country this week, meeting with high-level government officials and the chairman of the world’s largest carrier, China Mobile.

The company also just published its new Chinese New Year Gift Guide. It features Apple’s top picks for products and accessories, and can be seen in its China, Hong Kong, Singapore and Malaysia web stores…

Displayed prominently on the Gift Guide, which was first spotted by M.I.C. Gadget (via TUAW), is the iPad mini. Apple just launched the Wi-Fi version of the tablet in China last month, and the cellular version is in route.

Pictured alongside the mini are the Smart Cover, and several third-party accessories from Logitech, Bose and more. There doesn’t appear to be any discounting, but Apple is offering free shipping, gift-wrapping and engraving.

As aforementioned, Apple is intensely focused on China right now. Cook told Reuters yesterday that the country is now its 2nd largest market, and that he believed that it would become its 1st largest in the near future.

If you want to check out Apple’s Chinese New Year Gift Guide, you can find it here.