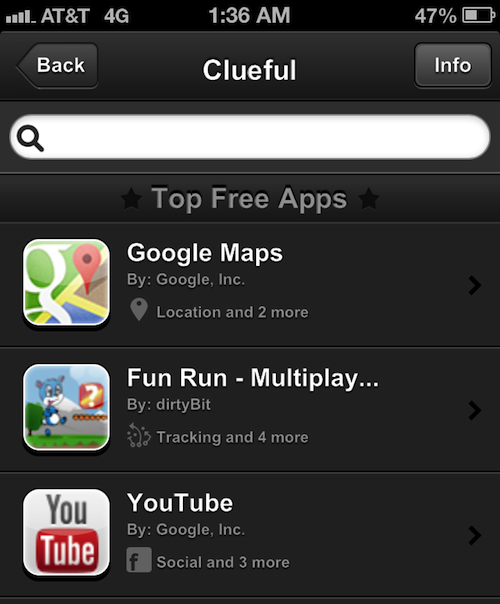 Clueful, a privacy app by Bitdefender, garnered a lot of attention last summer when Apple pulled it from the App Store without giving much of an explanation. It was odd, because the app claimed that it just identified privacy threats.

Well here we are, 6 months later, and we have still yet to hear a reason behind the removal. But obviously Bitdefender still sees a market for the app, as the software company has just re-launched Clueful as a web-based application…

Just like the original app, the web-based Clueful (first discovered by TUAW) identifies which App Store apps are asking for and recording your personal data. This includes everything from your location information, to your device’s UDID.

Now, with iOS 6, Apple has really beefed up privacy controls, allowing users to see which apps are accessing their contacts, calendars, reminders and photos, and an option to disable them. And it’s assumed this has eliminated most of the dangers.

But for the overly cautious, Clueful can provide a competent second opinion. If you want to check it out for yourself, just visit the website www.cluefulapp.com. It can be viewed in any web browser, but it was designed to look best on the iPhone.