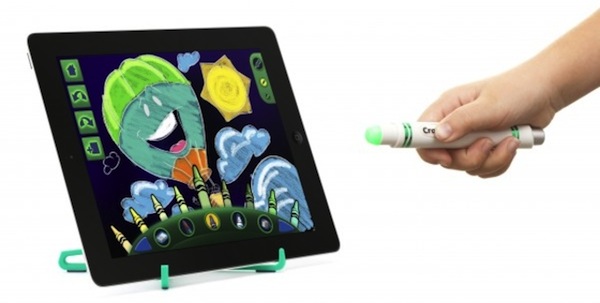 CES didn’t officially start until today, but we’ve already seen a plethora of new mobile products and accessories. We’ve told you about smart watches and smart forks, and even smart automobiles. And now we have something for the kids.

Crayola, easily one of the most recognizable names in art supplies, has teamed up with iOS appendage-maker Griffin to create the Light Marker, a marker-shaped stylus that can draw on an iPad without having to touch the screen…

Interestingly enough, the stylus uses the iPad’s front facing camera to recreate your in-air drawings on the screen. It comes with several different bundled modes and games, and of course a free draw feature to facilitate further creativity.

Crayola has also announced two other new iPad-oriented products this week. The first is the Digital Activity Center, a sleeve-like case that doubles as a lap desk and features a built-in handle, hard coloring surface and even a dry erase board.

The second is the Color & Play Workstation. It’s essentially an iPad stand designed for “tabletop creativity.” It also has a built-in handle, as well as three cubbies that can stow crayons, markers and input devices like the Light Marker stylus.

Crayola’s Digital Activity Center will run you $39.99, and is available now. And both the Color & Play Workstation and the aforementioned Light Marker will hit the market in the spring, with price tags of $19.99 and $29.99 respectively.