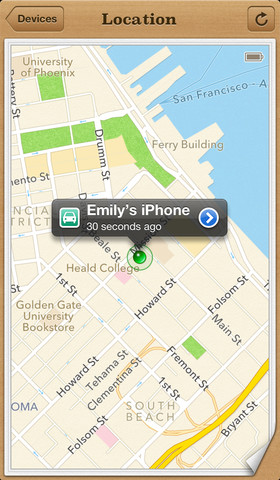 Apple’s underappreciated Find My iPhone app (BTW, shouldn’t it be called ‘Find My iOS Device’ instead?) has seen some clever uses that went a long way toward retrieving stolen iPhones and iPads. But punk trombonist Nadav Nirenberg took it to the next level when he posed as a women in order to lure an unsuspecting thief who stole his iPhone into a trap. According to media reports, holding a hammer in his hand, Nadav was patiently awaiting for the thief to arrive at his apartment to arrange an exchange…

Last Friday, New York Post reported how the 27-year-old used a phony online dating profile to trick the iPhone thief. He apparently learned that someone had been using the phone to send messages to girls.

He then used the same dating site to message the crook and arouse his interest.

As explained on Nadav’s blog, the thief replied back to confirm he wanted to meet at “her” place that night.

The bandit knocked on his door at around 7 p.m. holding a bottle of wine. He was clean-shaven and smelled like cologne.

“He was ready for a date,” Nirenberg said.

But instead of a kiss, the musician tapped him on the shoulder from behind, flashed a hammer and demanded his phone back.

The crook, who was short and soft-spoken, nervously handed over the cellphone and bolted after Nirenberg handed him $20.

It all took less than 20 seconds.

“As he was walking away, I said, ‘You smell great, though,’ ” Nirenberg quipped.

He didn’t even file a police report because “he didn’t want trouble”.

If something like this happened to me, I would sue the crook’s ass off.