Though Apple is believed to have sold in upwards of 50 million iPhones last quarter, there are still many critics out there that believe both the handset, and the software it runs, are getting a bit long in the tooth.

This is why we continue to see concepts for new iPhones and iOS features with refreshed designs. In fact, a new one popped up yesterday that gives the smartphone an all new look à la the 7th gen iPod nano…

These new iPhone 6 renderings come from the well-known Federico Ciccarese, of ciccaresedesign. He’s drawn up a number of Apple product concepts for us over the years, including these popular iPad mockups.

As usual, Federico’s futuristic iPhone impression is gorgeous. I’m actually really digging the iPod nano-like design. It kind of reminds me of a higher-end Nokia Lumia, and seems like it’d be really easy to hold and pocket. 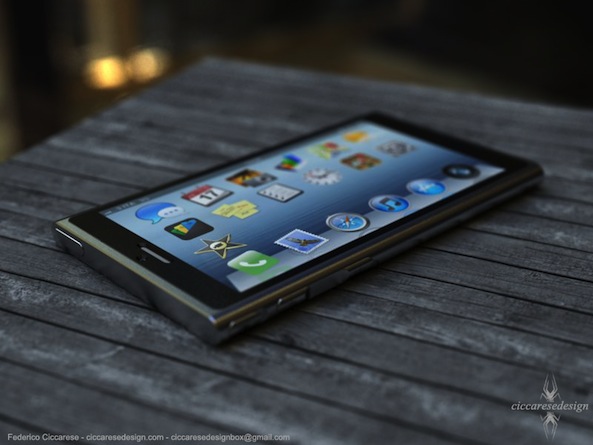 The operating system you see running on the handset is what he calls “iOSX,” a combination of iOS and OSX. I don’t really like the larger icons, they’re kind of tacky. But I wouldn’t mind iOS gaining more functionality.

All told, I really like this concept, and I wouldn’t mind if Apple borrowed from it. Recent rumors say it’s looking to up the handset’s release cycle to every 6 months, so we could actually see a redesign as early as this year.

What do you think of the new iPhone 6 concept? Would you buy one?