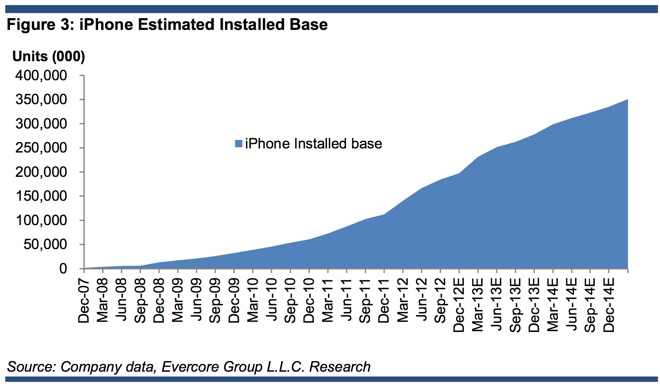 What should we expect to hear from Apple when it announces quarterly earnings later this month? One Wall Street observer Thursday forecasts a huge December quarter of 50 million iPhones and 24 million iPads sold. Although the company could report iPhone sales 86 percent higher than the previous quarter, an aggressive roll-out of the iPhone 5 may prompt Apple to reduce production by mid-year.

According to analyst Rob Cihra of Evercore Partners, the December quarter will reveal 86 percent growth of iPhone sales, compared to the previous three-month period. What’s more, the iPad mini will sell ten million of the 24 million Apple tablets moved during the holiday period, up 71 percent over the September quarter…

AppleInsider reports that Cihra told investors today that while the iPad mini had a “booming launch”, the continued high demand for the 9.7-inch tablet is constraining supplies.

As for Apple’s line of Macs, we may be seeing the first signs of strong demand for tablets taking some steam out of desktop and laptop computer sales. The analyst expects Apple will report five million Macs were sold during the December quarter, a three percent drop in year-over-year sales.

Because of Apple’s decision to introduce its 2012 products with larger scale launches and the pent-up demand for the refreshed iOS gadgets, Cihra is forecasting the 50 million iPhones sold in the December quarter will drop to 39 million for the March period.

Although he continues to see AAPL stock as ‘Overweight’, the Apple watcher trimmed his stock price target to $750, down from $775.

As always, the iDB team will be listening to the call to glean the most important bits related to Apple’s metrics during the all-important holiday season.