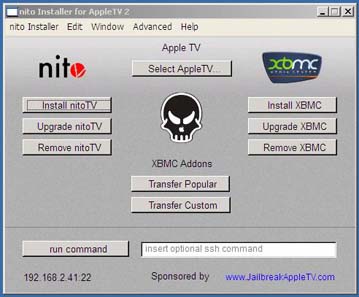 Great news today for Windows users with a jailbroken Apple TV2. The popular jailbreak tool known as nito Installer, which was released for the Mac platform back in August, is now available on Microsoft’s OS.

Like its counterpart, the Windows version of nito Installer allows you to easily install XBMC — a free, open source media player application — and other tools to your jailbroken ATV with just a couple of clicks…

You see, unlike on the iPhone or iPad, there’s never really been an easy way to install jailbreak apps on the ATV. You had to use SSH or Terminal commands to install anything. And that’s where nito Installer comes in.

Using nito Installer, you can now install apps like nitoTV or XBMC to your jailbroken Apple TV with the click of the mouse — literally. You can also use it to easily add XBMC plugins and run custom commands.

If your ATV isn’t currently jailbroken, check out our step-by-step guide on how to do it. If you’re hesitant, we also have a section that covers all of the benefits of jailbreaking the Apple TV, and why you’ll want to do it.

Otherwise, feel free to go ahead and grab the Windows-flavored nito Installer from our Downloads page. Using it is pretty straightforward, but if you’re looking for help, our tutorial for the Mac version should suffice.