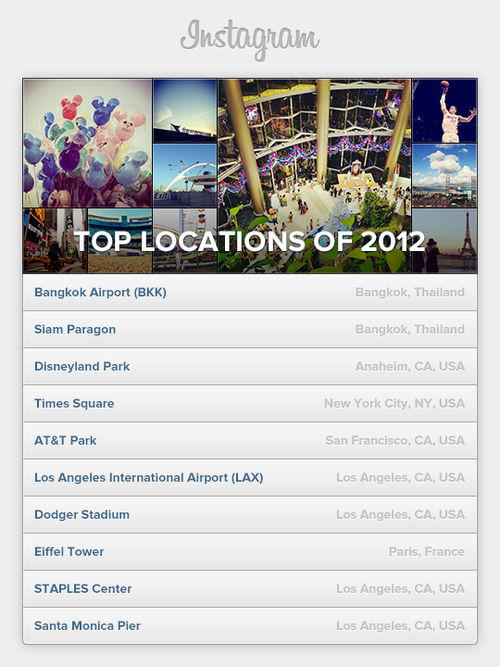 Christmas is over and 2012 is winding down, meaning it’s about that time where folks start reflecting back on the year. As such, Instagram has posted a list of its most popular picture-taking locations for the past 12 months.

Out of anywhere else in the world, Bangkok’s Suvarnabhumi Airport was the most popular, with over 100,000 photos taken there in 2012. Interested in the rest of the list? We’ve got the whole thing for you after the break…

Overall, there aren’t many surprises here. Suvarnabhumi is one of the busiest airports in the world, and places like Disneyland, Times Square and the Eiffel Tower are all popular tourist attractions — meaning tons of photos.

2012 was actually a pretty big year for Instagram in general. It launched an Android app, hit the 100 million user mark, and oh yeah, it was acquired by Facebook for $1 billion (actually more like $750 million) in cash and stock.

More recently, the company has come under fire for making a change in its advertising policy. As it looks to monetize its photo-sharing service, a lot of users are worried that their personal photos will be sold to advertisers.