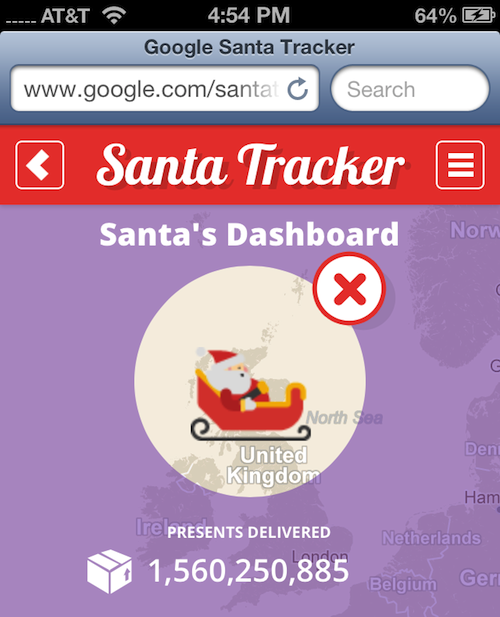 Put on the cheesy music and pour the egg nog, it’s finally Christmas Eve! And for millions of kids around the world, that means that it won’t be long now until Santa Claus shows up.

In this day and age of GPS technology, it’s never been easier to track Santa on his 20,000+ mile route around the planet. In fact, you can actually do it right from your iPhone…

Google has activated its popular Google Maps Santa Tracker to help you keep tabs on Santa’s progress tonight. It’ll tell you where he’s at, how many presents he’s delivered, and more.

“We’ve received this special preview from one of Santa’s many developer elves, who are hard at work in the North Pole helping Santa prepare for his big day. Santa’s dashboard – featuring the latest and greatest in Google Maps technology and sleigh engineering – will allow you to follow his progress around the world, and also learn a little about some of his stops along the way.”

Additionally, the Santa Tracker also offers up information about the areas Santa visits, including photos and Wikipedia details. It’s quite interesting really, there’s a lot of data involved.

Google’s Tracker can be viewed on a desktop, but it looks especially great on your iPhone or iPad. If you want to check it out, simply visit www.google.com/santatracker on your device.