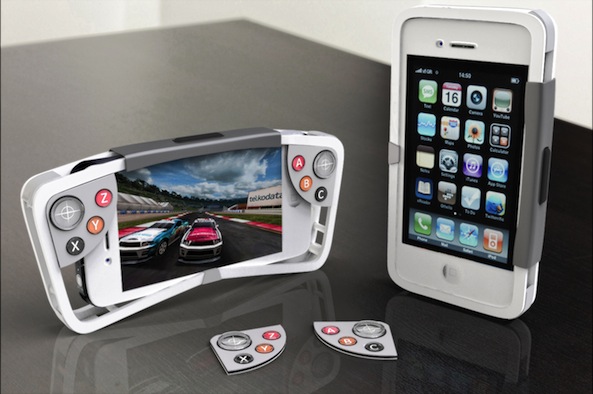 The iPhone gamepad space is starting to get a little crowded these days, mostly thanks to Kickstarter. It seems like every week now we see a new controller pop up on the crowd-funded site promising to be better than the last.

But so far, none of them have managed to go mainstream — outside of maybe the iCade line — meaning it’s still anyone’s game. And this week, Justice Frangipane and crew decided to throw their hats into the proverbial ring…

Frangipane, alongside iDevices — the team behind the popular iPhone-friendly meat thermometer iGrill, would like to introduce the ‘Iphone Game Controller Case,’ a slim case for your iPhone that has built-in gaming controls.

It uses Bluetooth 4.0, which requires little power to operate and has 16x the response time than that of the previous version, and charges via solar power. It even supports trickle charging, meaning it can power up with little light.

And now for the big question, what about developer support? Because without high-profile, compatible games, this controller is just like the rest of them. Well actually, there’s been some interesting talk about this. From the FAQ:

“I’ve heard that many popular Gameloft games will be supported by this controller, is this true?

Gameloft recently released a controller of its own called the “Duo Gamer”. We believe that the Duo Gamer uses an Apple created api. If this is indeed true we will very likely be able to use the same standard as set by Apple for Gameloft to use.”

Gameloft, who produces some pretty big iOS titles like the Modern Combat series, support would actually be a pretty big deal. But until that gets confirmed, this is still a Kickstarter project like all the others, and it has to prove itself.

The solar charging angle is cool though, as is the lower-powered Bluetooth support. If you’re interested, head on over to the Kickstarter page. A pledge of $60 pre-orders you a controller case, if the project hits its goal of $135,000.

What do you think of the iPhone Game Controller Case?