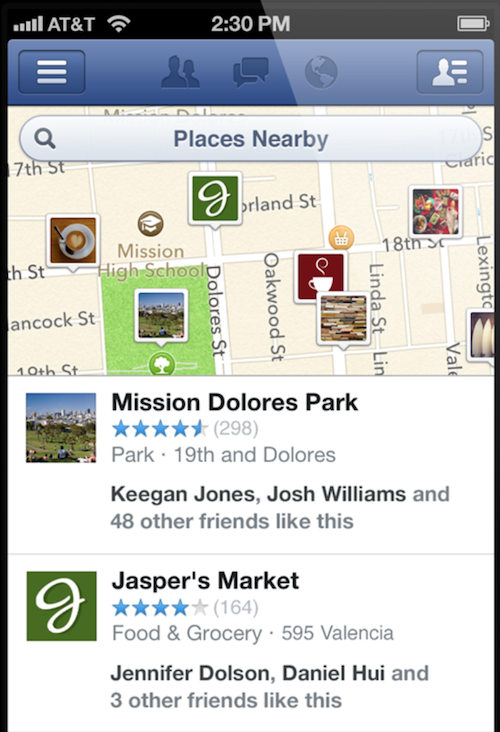 Facebook has announced this morning that it will be rolling out an update to its iOS and Android apps later today that will substantially beef up the Nearby feature. The refreshed feature will allow users to discover new places around them and view Yelp-like ratings and reviews from their friends…

“Today we’re announcing updates to Nearby in the Facebook for iOS and Android apps that make it easy to discover new places your friends like.

From the app menu, open the tab to find local spots your friends have recommended, checked into, or liked. If you’re looking for a place to eat, choose a category like Restaurants to see what’s nearby. When you find a place that looks interesting, tap to see info like friends who’ve been there and business hours.”

In addition to discovering new places, the new Nearby feature will also allow users to share their ratings and recommendations of places with their friends. And the way it works is, the more places you and your friends rate and review, the more personalized Facebook’s Nearby place suggestions become.

The whole thing sounds like Facebook, meets Foursquare, meets Yelp, and that may actually be the case in the future. Facebook says that it plans to add info from third party services at some point. And honestly, between that and Facebook’s massive user base, this Nearby feature has major potential.

The update will be rolling out later today to iOS and Android.