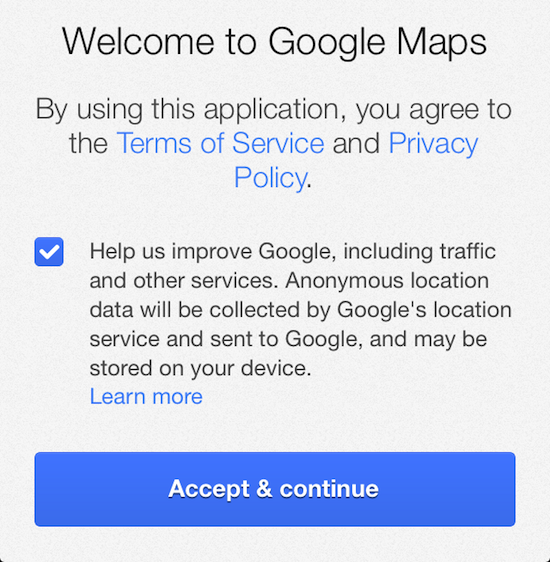 I read an interesting article the other day by Evan Wiener on why Apple dropped Google from Maps in iOS 6. Wiener suggested that Google was withholding features, like voice-guided navigation, as a negotiation tactic to get Apple to agree with deeper Google integration, and Apple finally said enough’s enough.

The well-connected John Gruber confirms that he’s heard a similar story from numerous sources — more specifically, that Google was wanting to collect user data for serving up targeted ads, and Apple said no. And wouldn’t you know it, it seems Google’s trying to do the same thing in its new Maps app…

“When the app is downloaded, Google prompts users to accept its terms of service and privacy policy in the startup screen. On the same screen, the Maps app warns users that they are about to share their location data with Google. “Help us improve Google, including traffic and other services. Anonymous location data will be collected by Google’s location service and sent to Google, and may be stored on your device,” Google tells users.

However, the option box next to the text is switched on by default, which isn’t allowed by European data protection law, said Marit Hansen, deputy privacy and information commissioner at the Independent Centre for Privacy Protection Schleswig-Holstein, Germany, in an email.”

The big deal here is that Google’s use of the term “anonymous” is a bit misleading. The ICPP’s deputy privacy commissioner Marit Hansen tells Computerworld that all available information points to having “linkable identifiers per user,” thus, this would be considered “personal data” under the European law.

And under European law, a company must get informed consent from their users before processing their personal data. Hansen believes that the current implementation in the Google Maps app does not comply with that code, and promises that the issue will be discussed further by members of the European government.

This certainly isn’t the first time Google’s user data policies have been called into question. Just a few months ago, the US Government hit the Mountain View search company with a $22.5 million fine after it was caught overriding Safari users’ privacy settings in order to better track their web browsing activity.

Now, I understand that a majority of Google’s revenue comes from advertisements — targeted ads to be more specific — and I understand that it needs user data to pull that off. But I just get the feeling that this constant invasion of privacy, or ‘bending of the rules,’ if you will, is going to come back and bite them some day.