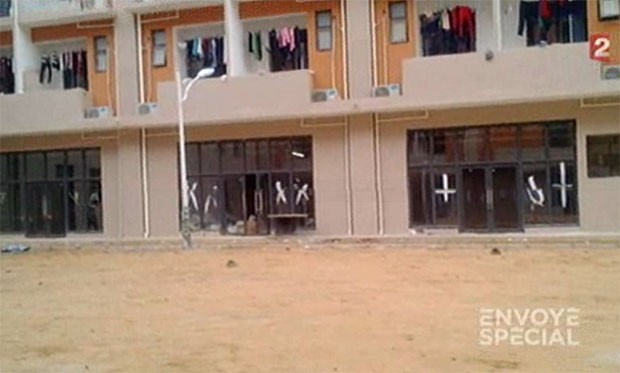 The walls around Foxconn’s larger manufacturing facilities are infamously well-guarded. The factories have been the source of a large amount of media criticism due to unfit working conditions, and they rarely, if ever, let press in.

So the folks of Envoyé Spécial, a French 60 minute-like TV program, had to go undercover to get into the Zhengzhou iPhone 5 factory to get the answers to their long-standing questions, like: are things really improving at Foxconn?

Unfortunately, judging by the footage in these three videos, they are not. The clips, especially the second one, actually paint a pretty bleak picture of the living and working conditions inside Foxconn’s Zhengzhou plant. See for yourself:

According to the report, many of the dorms you see in the second video are still under construction, and apparently have been for quite some time. They don’t have any elevators, electricity or running water, and employees still live in them.

And the buildings that do have electricity are dangerous. It’s said that a Foxconn manager has warned employees not to plug devices into their dorm’s electrical outlets because eight workers were killed in a fire after circuits overloaded.

It gets worse. The reporters also met several student employees that, although were of age, were working at Foxconn against their wills. They said that school administrators threatened to take away their diplomas if they turned down the job.

The Envoyé Spécial reporters believe that a lot of these issues are a result of Foxconn trying to keep up with iPhone 5 demand. One employee told them that because the handset is so difficult to make, the company has to vigorously recruit in order to offset the turnover from frustrated workers.

In response to the report, Engadget reached out to both Apple and Foxconn for comment. Here’s what Apple said:

“Apple is committed to the highest standards of social responsibility across our worldwide supply chain. We insist that all of our suppliers provide safe working conditions, treat workers with dignity and respect, and use environmentally responsible manufacturing processes wherever our products are made.”

Back in March, Tim Cook visited the Zhengzhou plant while in China and it appeared that conditions at the factory had been improving. But now it’s starting to look like problems are just being swept under the rug while the press is around.