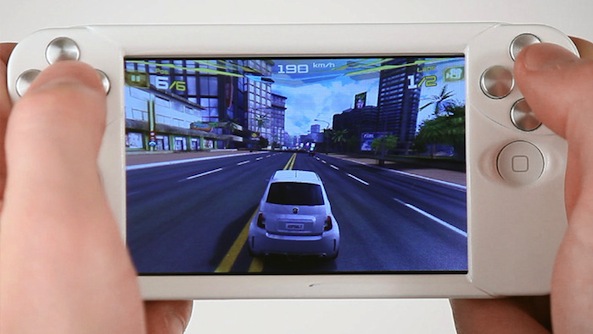 Now, I know what you’re thinking, “ugh, not another iOS gamepad! We’ve seen dozens of these already and they’re either too expensive, too bulky, or too complicated.” And you’re right, we’ve seen a number of these things, and most of them fit that description.

But what if I were to tell you that this new gamepad called the WynCASE was different? What if I told you that it was inexpensive, extremely thin, and didn’t require a Bluetooth connection or batteries? Does any of this pique your interest? Good. Keep reading…

The WynCASE is an ultra-thin snap-on gamepad for your iPhone 4, 4S or 5 from WynLABS. It features 8 physical buttons, which they say offer tactile feedback, and is both durable and reversible, so it can be used as a standard case when you’re not gaming.

But the really big deal here is the fact that the WynCASE doesn’t require any kind of wireless connection or batteries. It uses patent-pending BridgeTOUCH™ technology to send signals from its buttons to your device’s capacitive touchscreen, just as if you were touching it.

Unfortunately, the WynCASE isn’t for sale yet. WynLABS just launched a Kickstarter project for the gamepad and is hoping to raise $80,000 in the next 30 days to start production. For those interested, $30 gets you on the pre-order list and you can even pick the color.

There’s no question that iOS is a popular gaming platform. The App Store offers more than 100,000 games, and many of them, like Modern Combat 4, have console-quality graphics. Unfortunately, we’ve yet to see a proper gamepad that supports more than a few titles.

Do I think the WynCASE could fill that void? No. Under ‘Developer Support,’ it lists the usual “100s of games already work with WynCASE, and more are coming.” But this is by far the most interesting take on the iOS gamepad I’ve ever seen, and I’m rooting for them.

What do you think of the WynCASE?